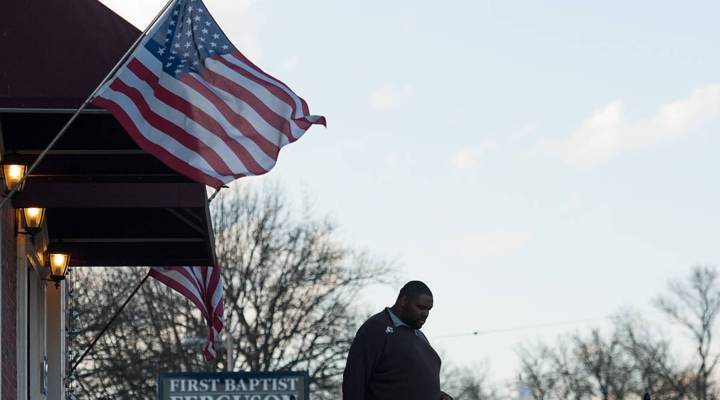 COPY
A man exits the polling station after casting his ballot during the Missouri primary voting at the First Baptist Church of Ferguson in Ferguson, Missouri last year. MICHAEL B. THOMAS/AFP/Getty Images

A man exits the polling station after casting his ballot during the Missouri primary voting at the First Baptist Church of Ferguson in Ferguson, Missouri last year. MICHAEL B. THOMAS/AFP/Getty Images
Listen Now

It’s been more than two years since Michael Brown, an 18-year-old African American, was shot dead by a white police officer in Ferguson, Missouri. Although the national attention faded long ago, people are still curious about the town that was marked by violence and protests for days after the shooting, and helped fuel the Black Lives Matter movement.

Occasionally, the neighborhood where Brown was killed becomes a stopping point for tour groups.

Ferguson City Councilwoman Laverne Mitchom found herself leading one group late last year. Their bus stopped at the site of Brown’s death, which is marked by a dove, for a quiet moment. Neighborhood kids who were playing on their bikes stopped to gawk at the strangers, who were gawking at their neighborhood.

Mitchom and the group didn’t linger long. She prefers to focus on the present and how things have changed for the better.  “This is the Metrolink,” she told the group, pointing out the transit hub still in development. When complete, she said it will “connect transportation for all of North County,” which will boost the local economy.

Although some businesses along the main road in Ferguson that were damaged during the unrest haven’t reopened, “We have a Starbucks, and several businesses here on West Florissant, that have come to our community,” she said.

Among them is Centene Corporation, which has built a sprawling new branch just off the main road through Ferguson to handle tasks like medical coding and claims management. The company said it decided to put the facility in Ferguson after all the unrest.

“You know, it felt good,” said Chris VanDaele, director of claims for the Ferguson Service Center. “It felt good to be doing something positive in an area that there wasn’t always positive news about at the time.”

Sonia Woods is a supervisor at the facility.

The company has a training facility to teach workers how to translate complicated medical forms into data for insurers and health care providers. The site also includes a community center, gym and on-site daycare. The daycare is particularly useful to Sonia Woods, who has a young daughter.

“You typically have to drive 10 to 15 miles east, west, north, or south…to get to something like this,” she said, discussing the facilities of her new workplace. “So I think that the job market was kind of small and limited but now it’s opening up.”

Woods grew up in Ferguson, and is now a supervisor at the facility. Before all the attention, she said, there weren’t many opportunities for good jobs close to home.

Woods said she used to bristle at the reactions people had when she told them she was from Ferguson. Now, she said she feels proud of the work that’s been done in the community.

“So we’ve come a long way and that was what Michael did,” Woods said. “He gave us a better opportunity than anybody else wanted to give us at the time.”

Now, she said, the people of Ferguson are using that opportunity to move forward.