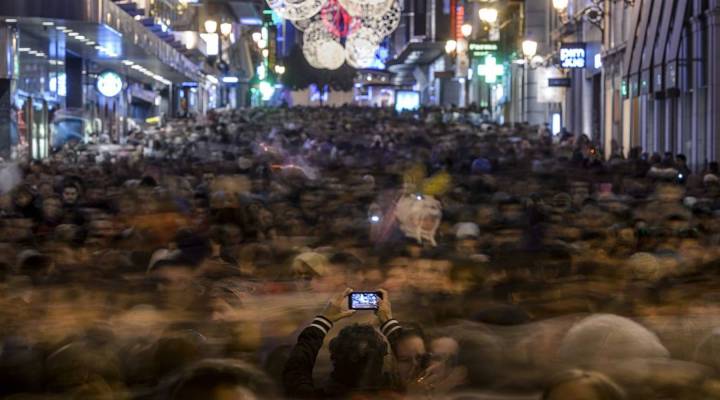 COPY
A lot of companies, big and unknown alike, often take information collected from you and sell it to other companies. DANI POZO/AFP/Getty Images

A lot of companies, big and unknown alike, often take information collected from you and sell it to other companies. DANI POZO/AFP/Getty Images
Listen Now

Big companies make big money off of our data. Google, Facebook and Amazon all do it and even data-broker companies that you’ve never heard of, like Acxiom or Intelius, take information collected from you and sell it to other companies.

Andreas Weigend is the former chief scientist of Amazon and he’s on a mission to give us more control over our own data through education.

His new book is called “Data For the People: How to Make Our Post-Privacy Economy Work for You.” Weigend talked to us about the role personal data plays in our every day lives and who is collecting it. Below is an edited transcript.

Ben Johnson: Why did you write this book?

Andreas Weigend: I wrote the book because I believe that data can be used to empower people. I try to figure out what should our rights be. So our data, the data we create and share, is used for us.

Johnson: I would imagine a lot of terms of service agreements that we sign make it so that the data is not owned by us.

Weigend: Even worse. In most cases they ask us to lie, to say that we have read and understood some like 44-page agreement, otherwise we can’t continue. That is not the rights which I want to waive, not even knowing what I’m waiving them for.

Johnson: We were just talking before we really started the interview in earnest about your own experience asking for information about your dad and trying to get your dad’s data. Can you talk about that?

Weigend: The story about my father is that he passed away and then afterwards I learnt that it is possible to gain access to the data of the Stasi, the secret police in East Germany had about people. So you needed to do this in writing. I wrote the letter and a couple of months later I get a letter back saying, “Well, we are sorry. To protect the innocence of the informants, there’s no data available of your dad. But since you asked, here would be the cover sheet of your own Stasi file.” So that was amazing to me that, you know, I was a kid at the time, and then in East Germany I was a grad student when East Germany collapsed, and they had already started collecting data about me.

Johnson: How are you thinking about Donald Trump’s administration and how it may deal with questions about data?

Weigend: For people coming to the country, I cannot believe how intelligent people would ask them to give them social media information.

Johnson: You’re talking about this policy from the Department of Homeland Security that actually began under the Obama administration, the idea being that when certain people come into the country, they may be asked for their social media handles or accounts.

Weigend: But if you think about that, it will only really hit innocent people. And if you have exponentially growing amounts of data about people, there’s always something problematic about that. We need to realize that some data is wrong. I would expect people in the United States of America to think about what they are asking people, and not having a naive question which ultimately will only work against the people and not for the people.