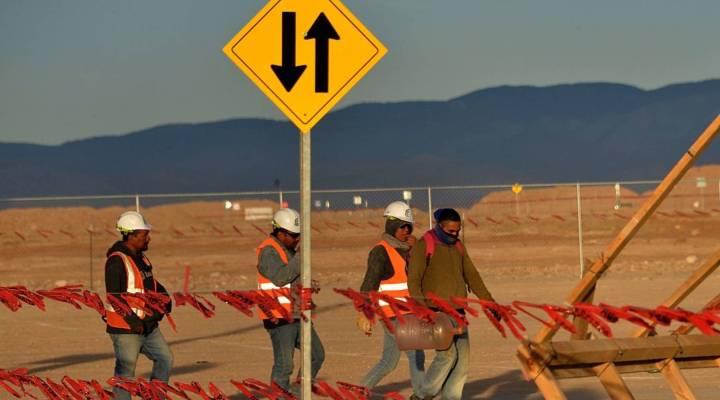 American companies with international operations are under pressure from activists and some consumers to take a stand on the Trump administration’s travel ban. Others are under pressure to create jobs or bring them back from factories abroad. In the meantime, lots of companies are simply trying to steer clear of the president’s Twitter feed.

President Donald Trump has been particularly adamant about his promises to bring back industrial and manufacturing jobs from Mexico. He has shown his willingness to call out companies like Carrier and Ford to prevent them from expanding south of the border.

Salvador Contreras teaches economics at the University of Texas- Rio Grande Valley, and said many companies are likely hesitant to start new investments in Mexico in this environment.

“What I suspect is going to happen is they’re going to continue to operate steady as we go while the they get better clarification,” he said.

But some Mexicans who work the assembly lines at these factories, called maquiladoras because they are run by foreign companies, are worried about Trump’s plans. Viviana Valenzuela makes plastic dishes in Nogales, Mexico that are also exported to the U.S.

“Among the employees, we talk and make comments and it’s logical we’re all bothered by what [Trump] is doing, and what he wants to do to the Mexicans,” she said, speaking through a translator as she stopped for a moment on her way to work.

Trump promises to renegotiate trade deals like NAFTA to get better deals for American workers, and has indicated he’s open to taxing goods coming from Mexico to help pay for a border wall. But it’s unlikely American companies will pack up shop and leave Mexico anytime soon.

“You can’t just turn off the lights and walk away,” said Contreras. “These are hundreds of millions of dollars of investments in infrastructure, and in facilities and in training people to produce the goods and services that they that they produce.”

That’s why other factory workers in Nogales aren’t worried. Jose Antunez said he thinks his job at a tampon factory is safe, even if Trump does change policies toward Mexico.

“A majority of the businesses that come from the United States or other countries, they look for is stability and ways to save money,” said Antunez via a translator. “And in this aspect… I think we’re fine.”

Pay at these factories is still a fraction of what it is in the U.S., and the Mexican peso hasn’t been doing so well against the dollar since Trump’s election. That could make it even cheaper for American companies to stay put, even with a tax.