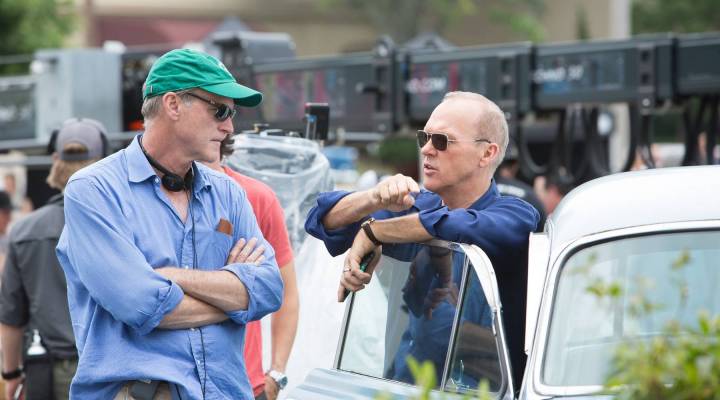 Ray Kroc is the man behind McDonald’s unprecedented rise from local burger joint fast food giant, but he didn’t come up with the idea that was the McDonalds brothers.  John Lee Hancock’s new film “The Founder” examines how Kroc, played by Michael Keaton, became partners with the brothers and eventually bought them out of their business.

John Lee Hanock on why he wanted to do this story:

I didn’t know anything about the movie until the script landed on my desk and I was kind of mesmerized by it because I found myself with a strong rooting interest for the protagonist Ray Kroc in the first half of the movie. And then started questioning his motives and actions in the second and by the end was kind of gasping at some of the things that he was doing. And I thought that I hadn’t read a script like that ever and probably hadn’t seen a movie like that in a long long time and it seemed like a high-wire act that was worth trying to take on.

About that “handshake agreement” when Kroc bought out the McDonalds brothers:

[Kroc] had paid [the McDonalds brothers] a large sum of money in 1961 numbers but in addition to that, they had requested one percent of future profits and they never received their royalties which would – I mean the estimates go between one hundred and two hundred million dollars a year per brother as to what they would have been worth. But the other thing that’s funny is that there were a lot more handshake agreements back then obviously, and Ray Kroc was famous for having lots of them, and lots of them worked out perfectly well I think he had a handshake agreement with the guy that provided their paper products for like 40 years or something.

On the movie opening coinciding with Inauguration Day: