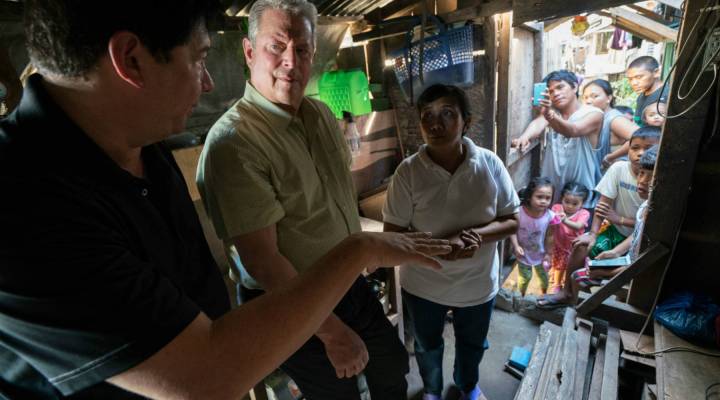 COPY
Al Gore appears in "An Inconvenient Sequel" by Bonni Cohen and Jon Shenk, an official selection of the Documentary Premieres program at the 2017 Sundance Film Festival. Courtesy of Sundance Institute

Al Gore appears in "An Inconvenient Sequel" by Bonni Cohen and Jon Shenk, an official selection of the Documentary Premieres program at the 2017 Sundance Film Festival. Courtesy of Sundance Institute
Listen Now

John Cooper, director of the film festival, said his team was discussing what the festival was going to look like last summer. Then they started talking about how they thought filmmakers shied away from making movies about the environment. Maybe it’s too complicated or too political. He said for them, the films weren’t about being political, they just wanted to give people the chance to have a discussion.

Then, he said, they started watching the movie submissions. And there were a lot of them about climate change.

A still from “Chasing Coral” by Jeff Orlowski, an official selection of the U.S. Documentary Competition at the 2017 Sundance Film Festival.

“So, not only were we already planning on making it something, we actually had the films to back it up,” he said.

The subset of films and projects is called “The New Climate,” and the issues they tackle range from a discussion of climate science to a profile of workers at a Chinese recycling factory.

“But film and television give such an opportunity to give voice to those stories,” she said.

Yi Jie appears in Plastic China by Jiu-liang Wang, an official selection of the World Cinema Documentary Competition at the 2017 Sundance Film Festival.

“Climate scientists are trying desperately to share what they know with the public about our changing climate,” he said. “But they simply don’t have a platform from which to tell stories.”

Sundance organizers said they’re not sure if the new subset is going to be a permanent fixture.