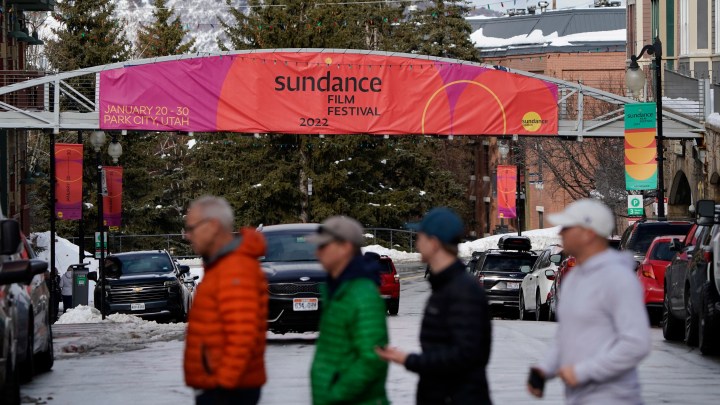 COPY
People pass a banner for the 2022 Sundance Film Festival on Thursday. The festival canceled its in-person program, a blow to local restaurants, bars and hotels. George Frey via Getty Images
COVID-19

People pass a banner for the 2022 Sundance Film Festival on Thursday. The festival canceled its in-person program, a blow to local restaurants, bars and hotels. George Frey via Getty Images
Listen Now

The pandemic has given big events like festivals and conferences quite the beating. They were just starting to make a comeback when the delta coronavirus variant hit, and now omicron is forcing many of them to scale back or cancel outright.

Take the Sundance Film Festival. It was supposed to make its triumphant return to Park City, Utah, at the end of this month. But on Wednesday, just two weeks before the event was supposed to start, organizers canceled its in-person screenings and events for the second year in a row.

That was a blow to Casey Metzger, whose bartending service, called Top Shelf Utah, had been hiring additional staff and stocking up on inventory for Sundance events.

“It’s a good thing wine gets better with age, right?” he said.

Metzger said moving the event online was the right call, but it still stings. Sundance week typically brings in one-third of his business’ annual revenue.

“It’s a blow, there’s no doubt about it. It’s gonna be tough to manage ’cause you’re so close, right? We were in the thick of it,” Metzger said.

At this stage of the pandemic, uncertainty is weighing on local economies that host these events.

“Very few destinations expected a fourth wave,” said Robert Croes, who studies tourism economics at the University of Central Florida. “And the omicron [variant] is now creating havoc throughout the industry with flight cancellations, event cancellations, group reservation cancellations and so forth.”

Dan Howard with Park City’s chamber of commerce said the local economy will weather this storm, just like it did last year when the annual rush of film buffs was replaced by skiers who typically wouldn’t have been able to book a hotel during the last week of January.

“The people who did visit Park City during the 10 days that would have been Sundance were very impactful economically,” Howard said. “So it didn’t ultimately have a negative economic impact on Park City looking at it from the annual perspective.”

In fact, Howard said, Park City’s 2021 economic performance was the strongest in its history. The difference is that while businesses had months to prepare for last year’s Sundance cancellation, this year they have only two weeks to pivot.

“It’s a devastating loss,” said Stephanie Samuels, general manager of Park City Peaks Hotel, which suddenly has a lot of rooms to fill toward the end of the month.

“We went from sold out to about 9% occupancy,” Samuels said. “We lost business that we can’t recoup at this point.”

One silver lining: If you’re booking a last-minute vacation to Park City, you can probably get a great rate on a hotel room.