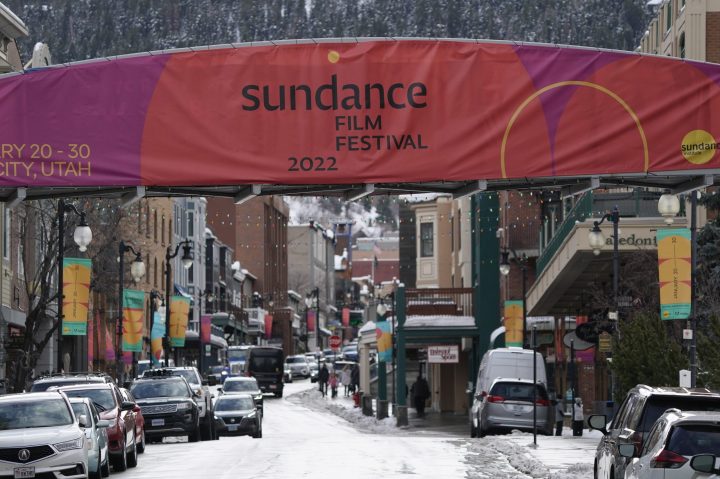 COPY
People and cars walk and drive up and down Old Main Street where filmgoers would have gathered for the 2022 Sundance Film Festival on Jan. 6, 2022 in Park City, Utah. George Frey/Getty Images)

People and cars walk and drive up and down Old Main Street where filmgoers would have gathered for the 2022 Sundance Film Festival on Jan. 6, 2022 in Park City, Utah. George Frey/Getty Images)
Listen Now

Former photojournalist Karim Ben Khelifa has new work premiering this week at the Sundance Film Festival. He was planning to attend in Park City, Utah, and when he learned earlier this month it was going entirely online due to concerns about the omicron variant, he was disappointed.

“I was a bit sad. But at the same time, it’s a rich man’s problem to some extent,” said Ben Khelifa. “The most important thing is for the work to be seen.”

In some ways, Ben Khelifa’s project is perfect for an online festival. He’s created an augmented reality app called Seven Grams. It’s about the materials that go into our smartphones and it tells the story of a child soldier who’s forced to mine for precious metals. It’s meant to be watched on a smartphone, and anyone can download it for free. So, Ben Khelifa isn’t looking for a distribution deal out of Sundance. But lots of filmmakers are. The festival is known for being a launching pad for movies. But if all the hobnobbing is through a screen, it’s unclear if films can generate the same kind of buzz.

“It is a different thing to watch a film at home where you have a lot of distractions,” said documentarian AJ Schnack. “As opposed to being in Park City, you’ve just escaped out of the cold, you’ve stood in line for an hour, and then you’re sharing this communal experience with a packed auditorium.”

“Of course it affects you, if everyone around you is going crazy,” said Sam Adams, who writes about film for Slate. “You still might end up not loving it. But I think it’s going to at least make you consider that.”

Schnack said if an audience has a positive reaction to a film, it can generate enthusiasm among critics and buyers. That experience can be difficult to replicate when the audience members are all separate.

But it’s not impossible: last year, when Sundance was first online, Apple bought global rights to the film “CODA” for $25 million, a record at the festival.

To try to enable that buzz (and the networking that can lead to it), Sundance has created the Spaceship, an online platform where people can create avatars to interact with one another. Karim Ben Khelifa is game to try it out, but knows it will take some work.

There could be a lot more people to mingle with, digitally. Sundance estimates that more than 600,000 took part in the festival last year. That’s nearly 3 times as many as when it was just in person.

“People have this notion that festivals are somehow a private system,” said documentary filmmaker AJ Schnack. “[Being online] gives people the sense that it is this thing that is reachable and like you can just buy a ticket and watch something the day it is out in the world, no matter where you are.”

Schnack says he also hopes people won’t get too used to watching movies on small screens – and that if they can go to a movie theater safely, they should.