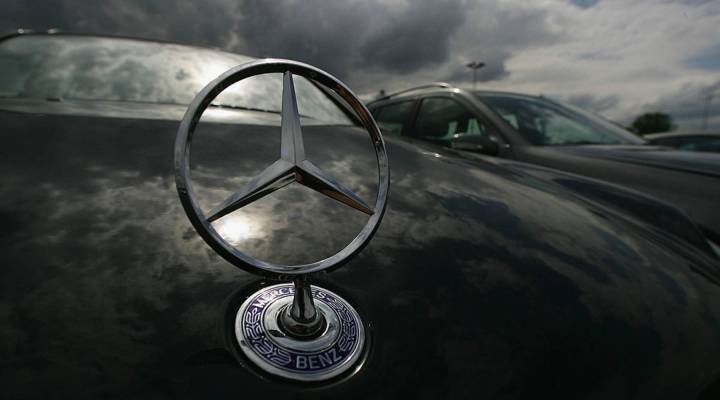 At first glance, moovel seems like a typical tech company bent on disrupting something or other, in this case transportation.

It has an office in Berlin in a co-working space packed with endless coffee, whiteboards and startups hacking away in cramped offices. Its employees tend to have a worldview like that of Mirjam Osswald: an emphasis on environmental protection and a belief that traditional car ownership is outdated. Public transit is at the forefront of Moovel’s business, with car sharing and ride hailing services backing it up.

“We really believe that public transit is the backbone of every city’s mobility infrastructure,” Osswald explained. “Nowadays, the necessity to own a car, I think it’s not present like it was in the past years.”

That’s exactly what one would expect from a mobility technology company. But it’s quite a surprising sentiment given Moovel’s owner: Daimler, the parent company of Mercedes-Benz.

The German automaker traces its roots all the way back to Karl Benz, credited with inventing the gas-powered automobile back in the 19th century. And it now has a whole division steering people toward a future with fewer cars on the road.

“Daimler has been evolving really beyond being just an automobile manufacturer into really a networked mobility provider,” Osswald said.

All the big German automakers are now talking like this, including BMW and Volkswagen. In different ways, they’re launching new businesses and investing in startups that envision a future where people won’t own cars like they used to. That includes public transit apps like Daimler’s moovel, car sharing services like Daimler’s car2go and BMW’s DriveNow, and ride hailing companies like Daimler’s mytaxi. In December, Volkswagen launched an entirely new mobility brand, MOIA.

The move toward services, apps, software and autonomous driving is also a bid to attract the world’s top talent, who may now be more inclined to work for companies like Uber, Google and Tesla, rather than legacy carmakers.

“Right now people are not interested in classical metal engineering,” said Hendrik Schneider, CEO of Yoove, which works with various companies in the mobility space. “They are looking for more modern technologies to develop a car in a more modern world.”

German automakers’ ventures into new mobility are not limited to Europe. These companies are also expanding in the car-happy American market, acquiring startups and launching new services.

The CEO of moovel North America, Nat Parker, was not originally a Daimler person. He came into the fold when the German automaker bought his Portland based startup, which focuses on technology solutions for public transit. That has made for some interesting interactions with the German executives.

Parker says his boss drives a screaming fast Mercedes sports car and “bent over laughing” when he first got a look at Parker’s dented, sputtering 1999 Subaru station wagon. He says he drives it infrequently, often preferring to take public transit.

“I said, ‘look, I’m the face of the new Daimler customer,’” Parker remembered.

Parker still has the Subaru and still gets teased by his German colleagues about not driving a Benz. But he’s open to having access to one every now and then, which means he is in fact the kind of customer Daimler needs to figure out how to serve.

A mix of fear and excitement about future customers is pushing Germany’s automakers to make these moves into new mobility. It’s not yet clear whether the perceived millennial skepticism about car ownership is real and lasting. Automakers hope they can still make money off these folks by selling them access to car sharing and ride hailing, ideally in cars they manufacture. Daimler also sells mobile ticketing software to public transit agencies and earns commissions on ticket sales.

“The reduction in people sitting one butt to a chair in one car, it’s really going to have a huge impact,” Parker said. “Not just on greenhouse gas emissions, but also on some of the core makeup of our cities.”

That means new mobility businesses could provide a potential image boost for an industry sometimes seen as environmentally suspect, or even outright scandalous in the case of Volkswagen and its emissions cheating.

These types of mobility services are new, so researchers caution that there are limited data on how popular they will be and what kind of environmental affect they may have. It’s also unclear how much impact they can have outside dense cities. But there are some positive early data, and transportation watchers are intrigued.

“Even if it just helps to make the usage of say, public transport more convenient, it still is a good thing,” said Tobias Kuhnimhof, department head at the German government’s Institute of Transport Research. “These investments are worth a try, simply.”

The big car companies agree, which is why they’re putting hundreds of millions into these new mobility ventures. That may sound like a lot, but it’s snack money for these giant automakers. Daimler alone did nearly 150 billion euros in overall revenue in 2015.

Staring down global trends that could threaten the core of their business, companies in the cradle of car technology are placing bets on something completely different, even if it is far outside their historical comfort zone.