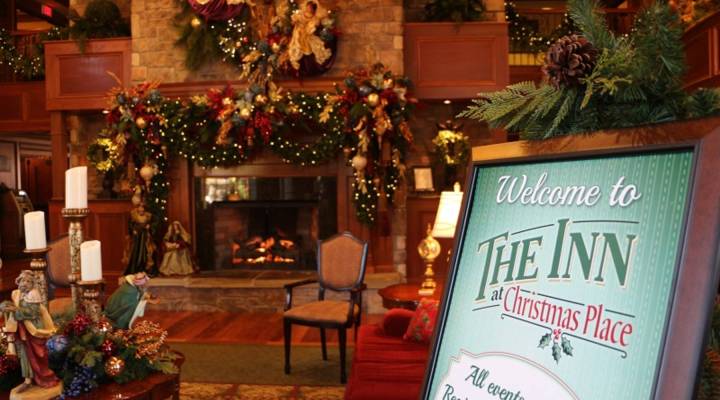 COPY
In Gatlinburg's sister city, Pigeon Forge, a Yuletide-themed hotel called Inn At Christmas Place has had to reassure patrons that the building is fine. Pigeon Forge escaped the worst of the fire. Meribah Knight/WPLN

In Gatlinburg's sister city, Pigeon Forge, a Yuletide-themed hotel called Inn At Christmas Place has had to reassure patrons that the building is fine. Pigeon Forge escaped the worst of the fire. Meribah Knight/WPLN
Listen Now

Gatlinburg, Tenn., is trying to recover after a devastating wildfire swept through the town at the base of the Smoky Mountains. Officials have charged two teenagers with arson, for allegedly starting the fire that destroyed or damaged at least 2,400 buildings and killed 14 people.

Many worry it will also hinder one of the largest economic drivers in the county: tourism.

At a press conference less than 48 hours after the evacuation, Gatlinburg Mayor Mike Werner stepped up to the podium. Werner’s home had burned down in the fire, as did his business, vacation rentals he had managed for 30 years.

First, he said the town was going to be OK. And then, almost immediately, he turned to tourism.

“If you really, really want to do something for Gatlinburg,” he said, “come and visit us. Come back and stay in our hotels, and our condos, and our chalets, and eat in our restaurants and enjoy our attractions.”

Gatlinburg is a city of 4,000 residents, but it has about 12 million visitors each year. Officials say that the industry accounts for more than half a billion dollars in tax revenue and nearly three-quarters of the city’s jobs.

It bills itself as a family-friendly mountain getaway, filled with country-style cabins and crafts, quirky attractions like a Dukes of Hazzard museum and at least five miniature golf courses.

If the fire keeps tourists away, that’s a particular concern at this time of year. December is usually the last busy month before a slow period, because families take end-of-year vacations and the area decorates extravagantly for the holidays.

Just down the road is Gatlinburg’s larger sister city, Pigeon Forge, which prides itself on installing five million lights each holiday season. One of the hotels, called the Inn at Christmas Place, is still busy at this peak of the season.

“We actually have Santa’s Suite on the top floor, and I would show it to you but it’s entirely booked until January,” chief marketing officer Janet Donaldson said a few days after the fire.

Most of Pigeon Forge escaped the fire, but even there, the industry had to reassure people it was OK to come.

“Somebody wrote today and asked if we had much smoke damage,” Donaldson said. “I was able to explain that we are very fortunate to be safely away from the fire area.”

Gatlinburg wasn’t so lucky. The whole downtown was closed for almost two weeks. Several businesses burned, as did part of the huge Westgate resort in town — which means not only loss of tourism but also loss of tourism jobs.

This is something that Rufus Surles is facing. He moved to Gatlinburg from Florida earlier this year to work at a seafood restaurant in town, the Smoky Mountain Trout House. He lives in an apartment in the same building. It didn’t burn, he says, but he suspects there will be layoffs.

“More than likely because of all the damage, a lot of people won’t be spending money like they were. It’s going to cost us a lot of business and probably cost some of us our jobs,” he said.

But the city hopes to minimize the financial blow. Just before the downtown reopened, the mayor put out a video showing off the city’s main commercial strip, which is still intact. He reiterated the call to visit.

And the Westgate resort says it will keep its employees — all 1,100 of them — on the payroll through Christmas.