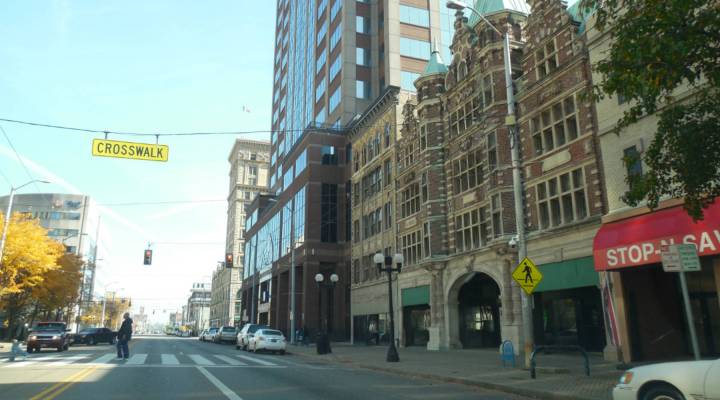 President-elect Donald Trump’s campaign included talk about building a wall along the southern border with Mexico, and banning people from Muslim countries from entering the U.S.

But lots of U.S. cities have already carved out an identity as immigrant-friendly.

Dayton, Ohio is one of those cities, with a program called Welcome Dayton that encourages immigrants to settle there, to help revitalize its economy.

Dayton has wide, quiet streets, a city built for a lot more people than live here now. But in 2015 for the first time in decades, Dayton saw its population increase, driven by immigrants.

A working-class neighborhood called East Dayton is one of the places that’s seen an influx, which is where I meet a woman called Nube — not her full name.

She came to the U.S. from Ecuador with no papers about 20 years ago, risking her life to cross the border alone — and she says she was lucky she survived.

“Many people when want to come here and live the American dream, they die,” she said.

Now she has three U.S.-born daughters and she works for $9 an hour sewing uniforms, which she says is a lot more than she could have made in Ecuador.

Nube WOULD have been protected from deportation by President Barack Obama’s executive order, the one known as DAPA, Deferred Action for Parents of American Citizens and Lawful Permanent Residents. But that’s been held up in the courts, and Trump says it’s high on his list to repeal it.

Nube’s scared of being separated from her daughters — one has just started college in Dayton.

Trump says he will withdraw federal funding from cities that shelter undocumented immigrants like Nube.

Dayton doesn’t actually call itself a sanctuary city, or explicitly refuse to work with federal immigration authorities. The definition of sanctuary city is blurry.

There currently isn’t an established legal definition. “Sanctuary” policies may include providing services to individuals without regard to status, or declining to spend resources assisting with immigration enforcement, according to Lena Graber from the Immigrant Legal Resource Center. The center has identified hundreds of policies for states, counties and cities that specifically don’t comply with ICE detainers — requests for law enforcement agencies to hold an individual following their release, allowing agents to decide whether to take the individual into federal custody for removal. Below are nearly 40 cities with these “sanctuary” policies, and how much they spend in federal funds, based on the most recent numbers available.

But the police department doesn’t gather information on immigration status and the mayor, Nan Whaley, has been clear about her views:

“I don’t care who the president is, Dayton is an open and inclusive community no matter what,” she has said.

Trump hasn’t been clear on how he would define sanctuary city, although he says his first targets for deportation will be people who have committed crimes.