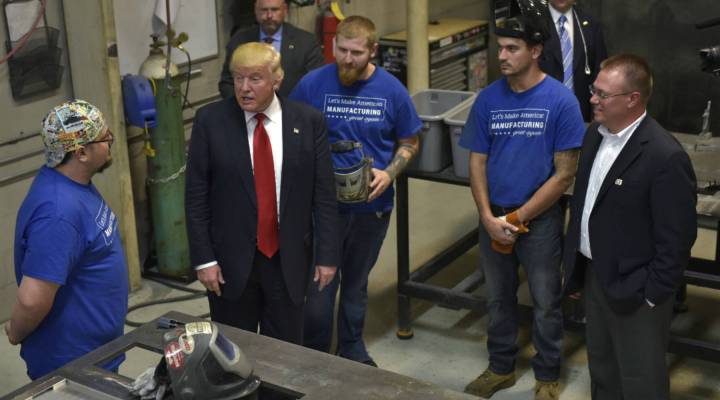 COPY
President-elect Donald Trump chats with workers during a tour of Staub Manufacturing Solutions in Dayton, Ohio back in September. MANDEL NGAN/AFP/Getty Images

Even as the economy has been front and center, poverty didn’t get a lot of air time during the election. And while a majority of low-income people voted for Hillary Clinton, low-income Americans were also less likely to vote overall.

Poverty has been gradually going down nationally: in 2015 the percent of residents living below the federal poverty line was 13.5 percent, after a peak above 15 percent during the fallout from the Great Recession. But Dayton, Ohio, is one of the places that has seen little of the improvement in incomes: poverty has climbed to 35 percent, more than twice the statewide rate.

Behind a Catholic Church in east Dayton in an early-morning food pantry line, I meet two Trump supporters, Susan and Dennis.

“We’re standing in this line because our tax dollars are failing to suit us anywhere else,” Susan said. Dennis said he’d voted Democratic in the past, but shifted to a Trump vote in hopes of something different: “I think he’s gonna change some things around and be for the good, for the people.”

But a woman named Sydney Michelle, who’s also in line, chimes in to say she thought Trump ran a hate campaign.

“I definitely voted Clinton,” she said, saying she wants to see peace and healing in the country after a divisive election. “I don’t see that with Trump being in office.”

“Most of the people we serve work,” said Sunnie Lain, who coordinates the food pantries for St. Vincent De Paul in Dayton. She said she’s worried Trump has offered false hope. “Many of them work full time, and many of them work more than one job. So the issue isn’t work, it’s work that pays at a level that’s sustaining. But there doesn’t seem to be a clear plan about training or about education, or about how these jobs are going to materialize.”

This neighborhood is still changing: There are more renters, fewer homeowners, and more deaths from drugs. Lots of refugees and immigrants are coming here, many from Muslim countries, which most people say has been helping to improve the neighborhood.

As we talk, people load canned goods into their cars, chatting and laughing. A woman in hijab gets in line, and when I ask what she thinks, she just silently shakes her head.