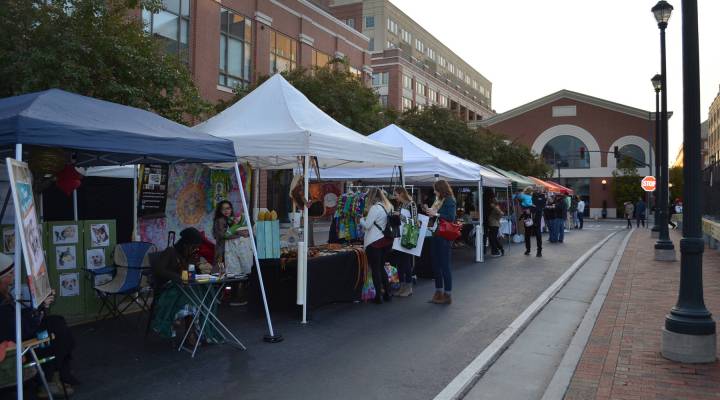 It’s almost Christmas and that means shopping, but how many transactions will be at brick at mortar stores? The National Retail Federation predicts holiday internet sales should rise at least seven percent this season. Hundreds of malls have closed in the last decade and dozens more are struggling.

To compete, a few malls are moving beyond the annual visit from Santa. One of them, Atlantic Station, is doing quite well in this tough retail environment. The Atlanta mall charges retailers about 20 percent over the market rate and rarely has vacancies. It attracts about nine million customers a year – like Caroline Long.

Long usually buys jewelry on websites like Etsy, but she wanted to attend an event at Atlantic Station. That prompted her to buy some earrings there. “I heard about the Crafts and Drafts event and then I wanted to come check it out, but I decided to go to H&M while I was in the area because I wanted to do some shopping for myself,” she explained.

Multiply her story by millions of customers, and it adds up to big profits – but Atlantic Station wasn’t always such a money-maker.

The story of Atlantic Station’s turnaround starts in 2009. Back then, mall developer Mark Toro didn’t have much work and was kind of bored. “Our industry was literally dead,” he said. “I spent a lot of time walking the streets of [a part of Atlanta called Midtown] and reading books and didn’t go to the office much because there wasn’t much to do.”

One of the books Toro read was called “The Experience Economy” by Joe Pine and James Gilmore. Toro said it changed the way he thought about his industry. What was the big revelation?

Joe Pine’s answer to that question started with something people already know. “It just becomes so easy to sit there at home and do all of your shopping, and have the packages just, you know, magically arrive at your door,” he said. “You have to have a reason to go to stores.”

That reason had been sale prices, but Pine called those a “death spiral” for modern stores. Online retailers have lower overhead costs, so they tend to win price battles.

“You’ve got to choose the opposite way of let’s provide a reason for people to come into our stores other than just the lowest price,” Pine said. “That reason is provide events and experiences that engage and create memories.”

Pine said some retailers have been doing this for years. Lululemon holds yoga classes. Some REI outlets have rock-climbing walls – but Pine said only a few malls have started using experiences. He names Mall of America in Minneapolis and The Grove in Los Angeles.

Here’s where Mark Toro comes back into this story. He’s managing partner of North American Properties, and, in early 2011, his company bought Atlantic Station.

It has a fair amount of outdoor space, like a grassy plaza the mall calls Central Park. “Central Park was a perfect place to host concerts, yoga, Mother’s Morning Out. We actually brought on a U.S T.A. tennis tournament to host on the property,” Toro said.

They also invite outside groups to hold events at Atlantic Station – like the craft fair that prompted Caroline Long to buy those earrings here.

Now, Toro and his company, North American Properties, are building up other developments around Atlanta. They’re getting ready to take their vision of the retail experience to other states.