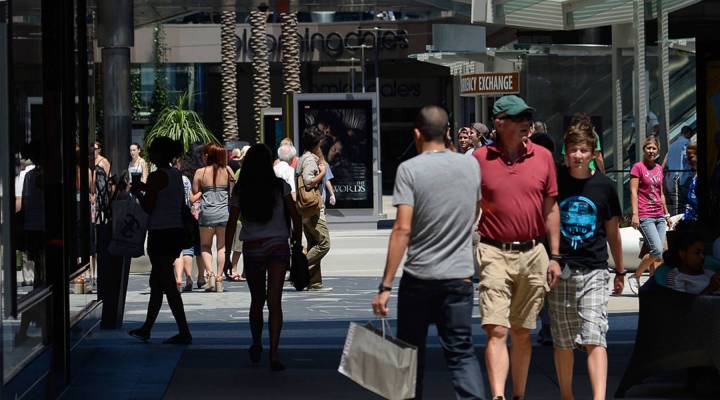 COPY
The latest survey on consumer sentiment from the University of Michigan follows news of high inflation earlier in the week. Kevork Djansezian/Getty Images

The latest survey on consumer sentiment from the University of Michigan follows news of high inflation earlier in the week. Kevork Djansezian/Getty Images
Listen Now

The recession changed the way Americans shop. While it was mostly all bad for brick-and-mortar retail, it wasn’t so bad for outlet malls.

They managed to thrive by selling discounts direct to the consumer. To keep that momentum going, however, outlet developers are making some changes to the business model.

Lee said it’s his first time at this outlet mall in years. Adriana Sifuentes visits outlets about twice a year.

That’s how it goes. Outlet shopping has mostly meant taking a long drive out of your way and spending half a Saturday looking for bargains. But that’s changing with the latest wave of outlet mall development.

Retailers used to have restrictions keeping outlets far away from their full-price stores, but they’ve relaxed them or removed them altogether in recent years.

These moves come on the heels of unprecedented growth in outlet mall sales, said Lisa Wagner, a consultant with the Outlet Resource Group.

“We always say that outlets are great in good times and they’re even better in bad times,” Wagner said. “The recession of 2008 really bore that out.”

Wagner said outlets are moving into the mainstream to reach even more millennial shoppers, who spend more on apparel than any other group.

“And the millennials have grown up with outlets,” Wagner said. “So this is part of their shopping behavior and it’s quite deep.”

When it comes to buying certain brands, it’s clear outlets will remain top-of-mind for shopper Sifuentes.

“We were looking for Nikes the other day, and then we’re like, ‘We should go to that Nike outlet,’” said Sifuentes. “And this is our closest outlet.”

That might not be true for long. Several developers are now planning outlet centers much closer to the center of Los Angeles.