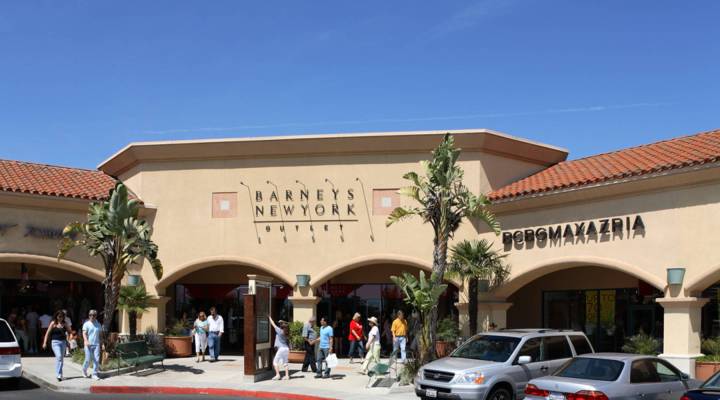 COPY
In the last five years, sales at outlet malls have doubled to about $50 billion, according to Green Street Advisors. Above, Camarillo Premium Outlets. Photo courtesy of premiumoutlets.com

In the last five years, sales at outlet malls have doubled to about $50 billion, according to Green Street Advisors. Above, Camarillo Premium Outlets. Photo courtesy of premiumoutlets.com
Listen Now

The Promenade mall in Woodland Hills in LA’s San Fernando Valley is dead on a recent Saturday afternoon. A movie theater and some restaurants are still open, but almost all the shops are closed. The only people inside are a group of young girls running around and filming each other with iPhones.

“Because it’s completely abandoned, they’re playing zombie,” Marcella Puettman said, mother to one of the girls.

Mall owner Westfield plans to soon demolish the struggling shopping center and put a $1.5 billion urban community with apartments, office towers and a stadium in its place.

“Macy’s was fantastic, and then they closed the Macy’s,” Pittman said. “I can’t believe that even the food court is closed.”

More malls are struggling as anchor stores close and online shopping continues to dominate. But at least one part of the bricks-and-mortar retail industry is still thriving: outlet malls. These centers are a surging source of profits for retailers and pitch themselves as shopping destinations for tourists and cost-conscious brand hunters.

The second floor of the Promenade mall in Woodland Hills is mostly empty on a recent Saturday.

Fifteen miles up the 101 Freeway, at Camarillo Premium Outlets in Camarillo, antsy drivers are making giant laps around the packed parking lot. Leaning against a pillar in the massive open-air mall, Alexis Rodriguez is holding bags full of Coach handbags.

“We come over maybe once or twice a year, when there’s, like, a good sale,” she said.

Ryan Newton drove an hour to get here and has spent most of his shopping time at the Nike store.

“I’m here for the discounts, the weather, and you know, just a little outing,” Newton said.

In the past five years, sales at outlet malls have doubled to about $50 billion, according to Green Street Advisors. Experts said that growth shows that shoppers are looking for experiences like the bargain-hunting thrill that outlets provide.

“The outlet store malls that you don’t see every day maintain much more of a mystique,” said Lars Perner, a University of Southern California clinical marketing professor. “They don’t have the same familiarity, and there’s something new to be found every time.”

Developers have been savvy, building outlets in places where people are already in the market for experiences, like near theme parks. They’ve also made them easy to get to, putting them just off busy highways. CoStar research director Suzanne Mulvee said other developers are catching on.

Retailers have found that when it comes to bricks and mortar, outlets are a better bet. They’ve become the most profitable distribution channel for some brands. David Hinkle with the Outlet Resource Group said that’s partly because rents in outdoor malls are way cheaper than their temperature-controlled counterparts.

“Then you couple the fact with many brands’ sales performance out of their outlet stores exceed what they do in enclosed malls, and then it just becomes a good math problem,” Hinkle said.

The numbers work because shoppers are showing up and behaving differently than they do in other shopping centers.

“The dwell time is longer,” Hinkle said. “They typically bring more people with them. They shop more stores, and they buy more.”

Back at the Camarillo outlet mall, Gary Millbrox takes a break from browsing stores to catch some sun on a wooden bench. He said that his job is running an online clothing store, so it’s surprising he’s shopping the good old-fashioned way.

“Online for me, I think, is more of like when you have to get something last minute or you don’t feel like going out,” Millbrox said. “But if you’re looking for the outing, shopping, walking around, retail stores is the more fun part.”

The challenge for outlet malls will be to maintain shoppers’ excitement. Remember, once upon a time, traditional malls were the place to be.