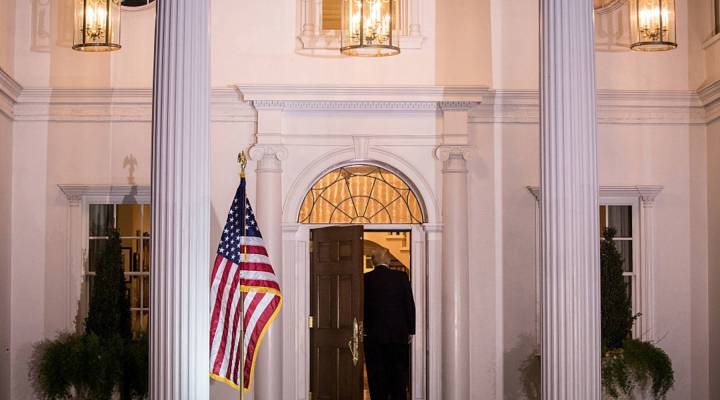 But Donald Trump has never had anything to do with that merry-go-round. He’s more like a train — one that smashed right into the merry-go-round on Election Day.

People who, in any normal transition, would be applying for White House jobs are now wondering, “Do I want to work for Trump? In light of the things he’s said?”

Stone volunteered for Trump in the Virginia suburbs of Washington, D.C. She said she’s met him and worked with him, and plans to apply for a job in the Trump administration.

“It’s important for the country that he has strong women’s voices around him and a woman’s perspective on a lot of his policy development,” she said.

Another Trump supporter has reached a similar conclusion.

“If you’re not in the game, then you’re not thought about,” said Gianno Caldwell, an African-American GOP strategist in Washington. “So he’s the only game in town. You can protest or you can be a part of the process.”

Caldwell wants to change things from within. But that can be difficult for a number of reasons.

“You can’t be a dissenter all the time and keep the job,” said David Luban, a law professor at Georgetown University.

Luban has fielded questions from a number of people gauging whether to work in the Trump administration. He said many find themselves wondering if they fundamentally disagree with Trump on major issues, should they work for him?

“What I said was, ‘If you think this administration is making promises to do things that you really abhor, then you just can’t go in,’” he explained.

Luban said there is peril for those who do decide to go in; they may be influenced by others around them and forget about their original objections.

“You may think that you want to stay on board because you can work for the lesser evil,” he said. “You may think you can tame the beast, but the beast is going to tame you.”

Then again, it’s not easy to resist the allure of putting “White House” on your resume.

“I would relish the opportunity to work in an administration of any kind,” said 19-year-old Henry Bendon.

Bendon is an eager political science major at Case Western Reserve University. Bendon supported and volunteered for Hillary Clinton. After the election, Bendon and a friend looked up Trump’s transition team job listings — as a joke, at first. Then they thought, “Hey, maybe we can help unify the country if we apply.”

“Honestly, any chance I could have to work with people or near people, in any capacity, I would be thrilled about,” Bendon said.

So, the Washington merry-go-round keeps on turning. It may be smashed up by the Trump train, but in the end many would-be White House staffers think to themselves, “Aren’t those horses pretty?”