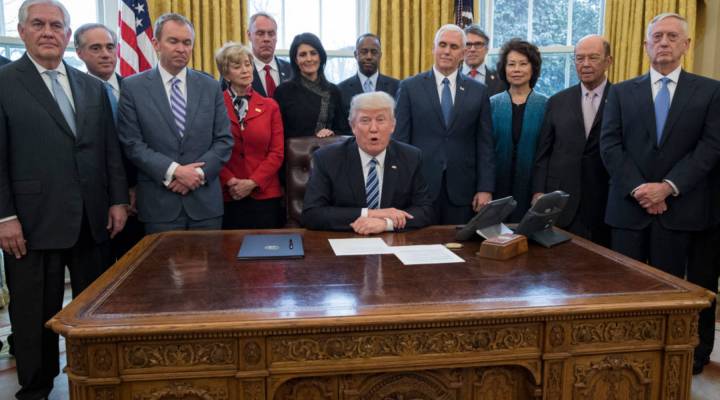 COPY
President Donald Trump beside members of his Cabinet in the Oval Office of the White House. Michael Reynolds-Pool/Getty Images

President Donald Trump beside members of his Cabinet in the Oval Office of the White House. Michael Reynolds-Pool/Getty Images
Listen Now

Five-hundred thirty-one. That’s the number of key jobs in the Trump administration that are awaiting Senate approval, according to the Washington Post and the Partnership for Public Service. But just because there isn’t a nominee doesn’t mean that the government offices are ghost towns. Over 400 staffers made the jump from the Trump transition to the Trump administration on Jan. 20, and their roles in the government are, well, a bit of a mystery. Justin Elliott, who reports on politics and government accountability for ProPublica, has been covering these “beachhead” staffers. Elliott spoke with Marketplace host Kai Ryssdal about who these folks are. Below is an edited transcript of their conversation.

Kai Ryssdal: So if the regular staff positions, as it were, are mostly empty at the presidential appointment level, who, then has President Trump installed across the government?

Justin Elliott: My colleagues and I obtained, through a public records request, a list of over 400 political appointees who have been installed in federal agencies from the Department of Agriculture to the Pentagon. And these are people on what the Trump administration is calling beachhead teams. And there’s a lot we don’t know about their role, but in some agencies these are the only, really, representatives of the new administration.

Elliott: You know, it seems to be some combination of both. Again, we have a lot of unanswered questions about this. But, for example, at each of the agencies there are people with the title of White House liaison. They actually, apparently, report back to the White House regularly on what’s going on in the agencies. I’ve also heard from career federal employees who reached out to us after we published our story that, you know, there’s a lot of confusion and chaos, at least in some agencies, about what, exactly, the role of these beachhead officials are. But there are also policy changes happening at some of these agencies, even the ones that don’t have Cabinet appointees yet.

Ryssdal: Who are these folks? I mean, give me a couple of examples here.

Elliott: Sure. So my colleagues and I have ProPublica analyze this list of more than 400 names. And I would say the biggest finding is there are literally dozens of people who are lobbyists, or were lobbyists, until they were hired by the administration. To give one example, there’s a gentleman at the Department of Labor named Geoff Burr who, until he got this job, was the chief lobbyist of the construction industry trade association in Washington. Mr. Burr used to lobby the department on wage issues, workplace safety issues, and now he has a government job in the department, and presumably has some sort of role in setting policy. So there’s at least around 36 people like that.

Ryssdal: And of course, the president said during the campaign and during the transition period, “No lobbyists.” Didn’t he?

Elliott: Right. He was asked directly a couple of times in the campaign about hiring lobbyists. At one point, he said he “wouldn’t have a problem not hiring lobbyists.” So we’ve seen a complete 180 from that statement during the campaign. These beachhead officials are also interesting because they’re not Senate-confirmed. I mean, the Senate confirmation process sort of allows for for two things: One is it allows senators to quiz the appointees about the administration’s policy priorities on whatever the area is. And the second is it allows for an examination of these people’s pasts. I mean, we saw that with Andrew Puzder, the nominee for Labor Secretary. He didn’t make it through the Senate confirmation process because, you know, things came out about domestic violence allegations, alleged mistreatment of workers at his company. And so he dropped out. These beachhead people, we were only able to get their names through public records requests. And I’ve been reporting on who some of these people are in the last several weeks. And some of them have been involved in scandals in the past, have colorful pasts.