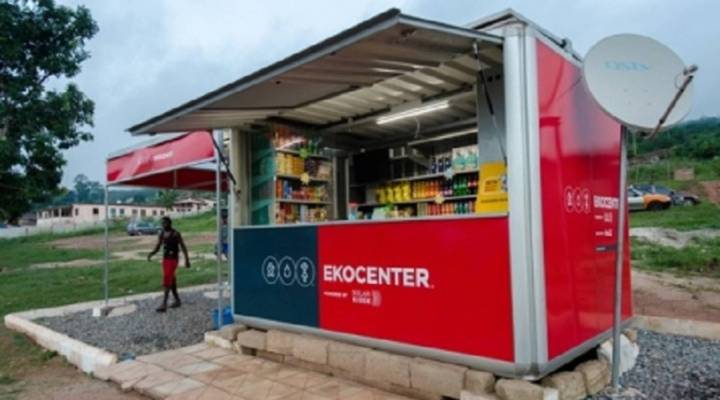 Coca-Cola is making a big bet on Africa. The Atlanta-based beverage giant sees the continent as a major growth market, as consumption of soft drinks declines in the U.S.

Across Africa, the company is also rolling out an experiment in social entrepreneurship. It’s a kind of community center in a box that also happens to sell Coke products. They’re called EKOCENTERs. The first four letters are “Coke” spelled backward.

EKOCENTERs look like concession stands, painted in the red and white of the Coke logo. Each unit sells consumer goods, including Coca-Cola and other beverages the company produces.

But Coke says the centers are meant to be community gathering spots. CEO Muhtar Kent was in Rwanda earlier this year for the grand opening of one next to a soccer field. Most of the centers offer water filtration systems and solar-powered outlets for charging cellphones.

The company won’t say how much it’s spending on EKOCENTERs, but its rollout comes as Coke makes major investments in Africa, aiming for $17 billion by 2020.

Coca-Cola is betting the continent’s burgeoning middle class may develop a thirst for its beverages.

West Virginia University professor Usha Haley studies how big companies use social entrepreneurship in emerging markets. She says there isn’t a strong correlation between those investments and corporate profits.

“This is a way to get rooted in the community and get the community to support Coca-Cola’s operations, and other multinationals have been doing this as well,” she said.

But Haley said corporate interests usually come first. And it’s not always clear whether governments in these countries will be good watchdogs.

“The problem is what happens when the media spotlight is removed from these EKOCENTERs. Who’s running them? Who’s making money off them? What is the quality of the services?” she said.

Coca-Cola says it’s committed to EKOCENTERs for the long term.

Its goal is to open more than 160 in Africa by the end of the year. It has  expanded the project to Vietnam, and plans to take it to other parts of the developing world in the coming years.