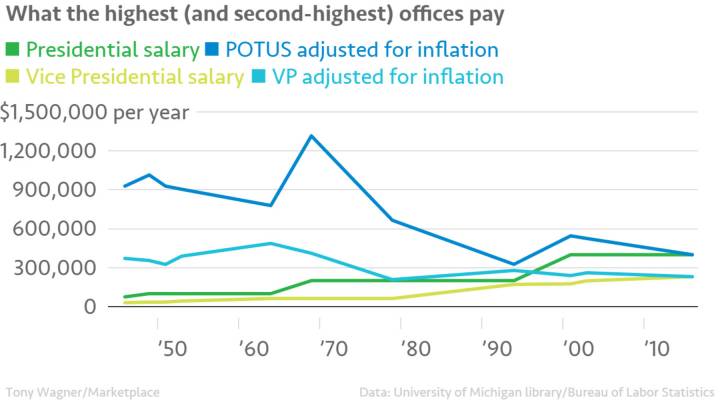 Donald Trump had mentioned during the primary season he wouldn’t take a salary if elected, but the president-elect confirmed it to Lesley Stahl on “60 Minutes” in his first interview since the election Sunday.

The president normally makes $400,000 a year, with a generous expense budget. With a self-professed multi-billion-dollar net worth, Trump is very likely the richest president and it’s not close. Mic notes the only other presidents to decline a salary are John F. Kennedy, who’s family fortune may have rivaled Trump’s personal wealth, and Herbert Hoover, who served amid the great depression and gave his salary away.

President George Washington made $25,000 in 1789, and the presidential salary has increased steadily since. Our chart begins at 1946, the first year we’re able to adjust for inflation with the Bureau of Labor Statistics calculator. We’ve presented them here in 2016 dollars. It was pretty good to be Richard Nixon in 1969.

We also found this report from a couple years ago, in which Oregon State University researchers ranked each president’s salary in 2012 dollars. Their calculation confirms Nixon was above average but William Taft made off like a bandit.