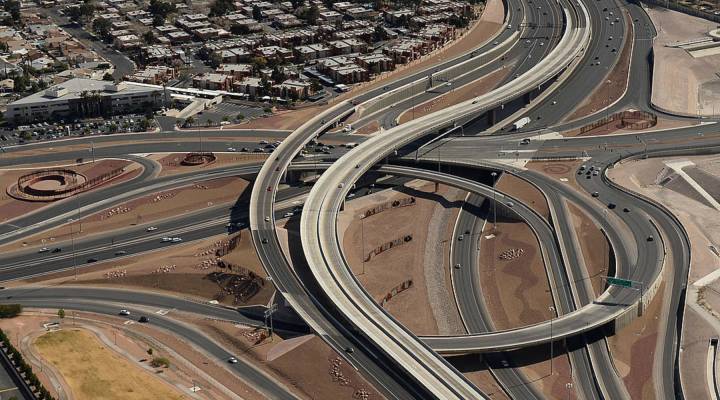 COPY
The interchange at U.S. Route 95 and Rainbow Boulevard known as the Rainbow Curve is seen in an aerial view in Las Vegas, Nevada.  Ethan Miller/Getty Images

The interchange at U.S. Route 95 and Rainbow Boulevard known as the Rainbow Curve is seen in an aerial view in Las Vegas, Nevada.  Ethan Miller/Getty Images
Listen Now

Infrastructure has been a hot topic over the last few weeks, and it’s one thing both political parties agree on. America’s bridges, roads, airports and schools need improvement and President-elect Donald Trump has promised a lot of investment. The markets have noticed. Copper and iron ore are up — a lot. But commodities are volatile, so it’s unclear how long this spike will last.

Trump’s plan calls for tax relief for private businesses that invest in infrastructure projects. In doing so, the plan said, the national debt would not increase. Heidi Crebo-Rediker, senior fellow at the Council on Foreign Relations and CEO of International Capital Strategies, said private investment can be good, but this plan only includes private investment.

“If you look at this as a taxpayer, do you pay your taxes to fund infrastructure investment that can then rely on cheap government borrowing to invest in those projects?” she asked,”or do you go down the path where you have equity investors that will invest and then borrow what would be more expensive funds?”

And whose privately built projects would require user fees — for example, tolls on new bridges and roads.

Lindsey Piegza, chief economist at Stifel Fixed Income, said a lot of analysts and investors have been begging for this kind of investment and relaxed regulation for years.

“And so there is this euphoric optimism that’s being priced in, but does it reflect the reality?” she asked, “Does it reflect an undermining change in the fundamentals of the economy? Not yet.”

“They used to call copper Dr. Copper,” he said. “If Dr. Copper is doing well, it’s a good sign for the economy and everybody else is going to catch up. Well, Dr. Copper has had its best run in 30 years, so I hope that bodes well for our economic future.”

Though, until the details of the Trump infrastructure investment plan get fleshed out, commodities prices will likely come back to earth.