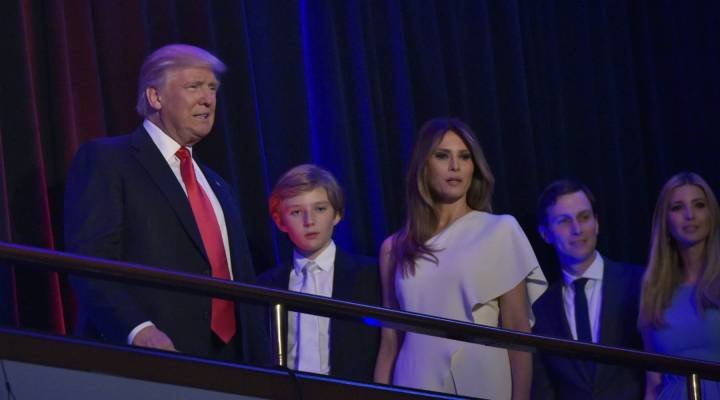 Donald Trump’s victory has raised questions about whether he’ll go through with the big promises he’s made on employment and trade.

He said that he’ll create 25 million jobs over the next decade, vowing to keep manufacturing  in the U.S.  Along with his actual policy proposals, some wonder whether Trump will also try to maintain the “tough guy” image he’s tried to cultivate for himself.

Ken Kurson joined us to talk about what we might expect from the president-elect’s leadership. He’s the editor of the New York Observer, which is owned by Jared Kushner, Trump’s son-in-law. Kurson has also written on money topics for Esquire Magazine, contributed to Marketplace, and worked as a speechwriter for Rudolph Giuliani, who is expected to play a prominent role in the Trump administration.

On what the Trump administration will have to do to make good on job promises:

I think step no. 1 is trade deals. Donald Trump ran talking about our disastrous deals and his skill as a deal maker, and that seems to have resonated. And the proof of that is the surprise states that he won — states that had been the hardest hit by manufacturing job losses, like Michigan and Ohio. [They] had been either solidly in the blue camp, like Michigan, or leaning blue, like Ohio, which voted for President Obama. And there’s clearly some resonance to that message. So I think you’ll see at least a reexamination, if not a renegotiation, and I think future deals will sort of start in a place more favorable to American workers.

On whether Trump will be a protectionist:

I think the whole advantage of a tough guy approach is that you don’t have to be tough. The whole idea of Ronald Reagan not  having to go to war, nuclear war with the Soviet Union, is that they believed he would if pushed.  I think that the idea here is that Donald Trump talks tough enough, so that his negotiating partners or adversaries — however you want to look at it — believe that he really will impose a 40 percent tariff, like he talked about, on Chinese goods if they’re caught devaluing their currency and things like that.

On whether Trump will be tough on Wall Street:

You know, Wall Street was not friendly to Donald Trump, and something I’ve learned about him — mostly from watching him through the media — is that this is a guy who remembers his friends and remembers his enemies. And Wall Street was firmly on Hillary Clinton’s side. I happen to hold the belief that that hurt her candidacy a lot. There’s this feeling in the electorate that what’s good for Wall Street is no longer good  for Main Street. So I don’t expect Donald Trump to be set out to be friendly to what you might be thinking of Wall Street, like the carried losses, provisions of taxes and things like that. However, I do think that policies that are good for American companies are ultimately good for Wall Street.