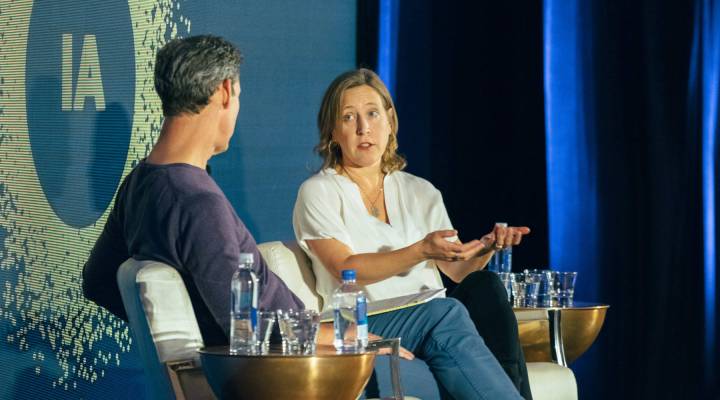 Remember how Larry Page and Sergey Brin started Google in a garage? That garage belonged to Susan Wojcicki. The Palo Alto native eventually became Google’s 16th employee. She ran Google’s AdSense program for years and was then tapped to run YouTube, the video-sharing website that Google bought in 2006.

Wojcicki talked to Marketplace host Kai Ryssdal in front of an audience at the Virtuous Circle conference put on by the Internet Association earlier this month. Subscribe to the Corner Office Podcast from Marketplace to listen to the full interview.

Wojcicki walked us through how YouTube has changed in the last 11 years, going from a place for random (cat) videos t0 a major content publishing platform. To help illustrate that journey, here are five YouTube videos that explain how YouTube became, well, YouTube.

The first YouTube video was uploaded by Jawed Karim, a co-founder of YouTube, in 2005. The next year, the company was purchased by Google. The short video about elephants and their “really, really, really long trunks,” started a new wave of video content that changed the way people consumed media.

Wojcicki said this 2006 video, of two college students lip syncing to a Backstreet Boys song, was YouTube’s first hit: “That was a lightbulb for me that made me realize that video and the technology enabling anyone to create video was going to be really powerful.”

Tutorial videos are another staple of YouTube these days, and one of the first creators in this genre is Michelle Phan. After joining the YouTube platform in 2006, she gained prominence for her make-up tutorial videos, like the one below from 2010. She has since parlayed that success into multiple channels on YouTube, a beauty product subscription service and a make-up line with L’Oreal.

The popularity of PewDiePie, a Swedish comedian who posts include him narrating his actions as he plays video games, was a surprise at first, Wojcicksi said. His channel helped the company see the value of the video game market. Now, video gamers are a huge audience for YouTube and PewDiePie, who joined the platform in 2010, is the most prolific creator. The first video he posted was of him playing Minecraft, but it the 2012 videos of him playing the game “Amneisa” that really built his following, PewDie Pie told RollingStone last year. (Just a warning, there’s some salty language in this video.)