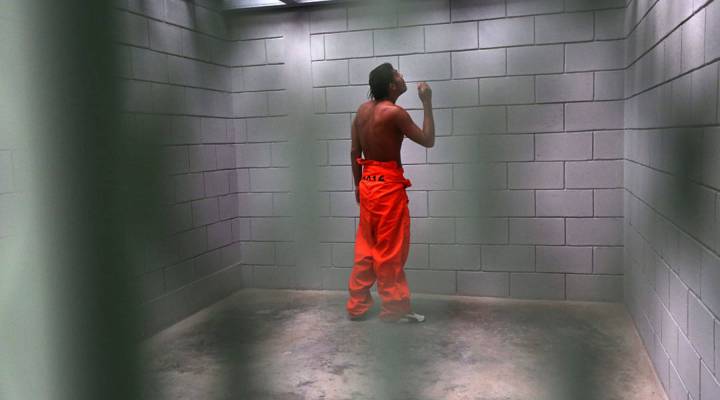 COPY
The U.S. Department of Justice has argued that fixed money bail for poor people violates their 14th amendment constitutional right to equal protection under the law. PRESIDENCIA/AFP/Getty Images

The U.S. Department of Justice has argued that fixed money bail for poor people violates their 14th amendment constitutional right to equal protection under the law. PRESIDENCIA/AFP/Getty Images
Listen Now

There are around 450,000 Americans in jail who haven’t been convicted of a crime. How many of them are there because they are poor is hotly contested and varies from place to place. Data from Los Angeles suggest it’s 14 percent there. A New Jersey study from 2013 put the number at 39 percent, advocates say it’s higher. By any measure it’s tens of thousands of people on any given day.

Bail’s effect on poor people is a problem that charities and several state governments have increasingly tried to grapple with in recent years. At least ten class action lawsuits have challenged the practice in the past two years. And the U.S. Department of Justice has argued that fixed money bail for poor people violates their 14th amendment constitutional right to equal protection under the law.

“There are thousands of people sitting in jail on minor offenses, essentially because they are poor. And because they are poor, they cannot afford the bail,” said David Feige,  chairman of the board of the Bronx Freedom Fund. The funds posts bail for low-income people.

“Bail is being unfairly painted as a debtor’s prison issue,” said Jeff Clayton, policy director of the American Bail Coalition, a trade association. He says the number of people in jail because they can’t afford bail is overstated, and believes bail is ultimately fair. “Bail is a liberty promotion institution as old as this nation.”

Click the audio player above to listen to the tale of one New York man whose arrest and inability to pay bail created all kinds of problems.