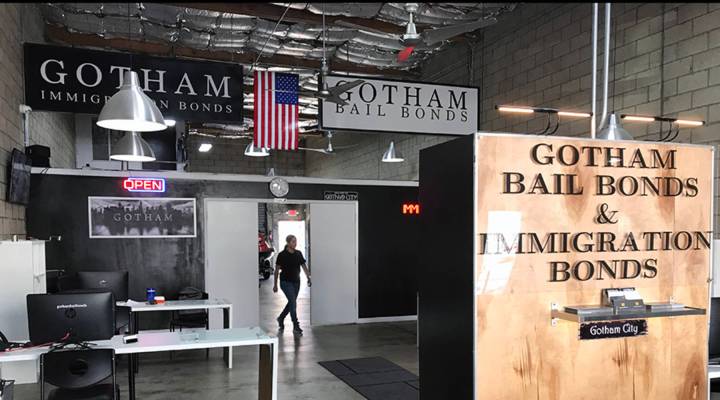 COPY
Bail companies posted nearly $1.75 billion in surety bonds with the Superior Court of Los Angeles County from May 2016 to May 2017, a recent report found. Above, an employee at Gotham Bail Bonds near downtown Los Angeles walks to her desk. Benjamin Gottlieb/Marketplace

Bail companies posted nearly $1.75 billion in surety bonds with the Superior Court of Los Angeles County from May 2016 to May 2017, a recent report found. Above, an employee at Gotham Bail Bonds near downtown Los Angeles walks to her desk. Benjamin Gottlieb/Marketplace
Listen Now

There are some big changes coming to the bail industry in California. Gov. Jerry Brown recently signed a bill into law that effectively eliminates the practice of paying money to get out of jail before trial. The move has sent reverberations through the state’s bail industry.

Nowhere is that perhaps more evident than in the neighborhood around Los Angeles County’s Men’s Central Jail in downtown LA. It’s one of the largest jail complexes in the country, and the streets around it are lined with bail bond businesses. Some even have employees trolling for clients on the sidewalk.

But starting in October of next year, California’s bail industry is set to change. Under the new law, getting bailed out of jail will be a thing of the past.

In its place, judges will decide whether defendants can head home without paying bail to await trial or have to stay locked up.

And for bail bond companies?

“What it means to me is the business I’ve built over the last 12 years — that business will have to close,” said Steffan Gibbs, owner of All-Pro Bail Bonds, with locations across California. “It means that 160 people that currently work for me will be out of a job and will have to go and find a new one.”

Gibbs said he’s not sure what he’ll do if he has to close his business.

A view of Men’s Central Jail in downtown Los Angeles.

A recent report commissioned by the chief justice of California found that from May 2016 to May 2017, bail companies posted nearly $1.75 billion in surety bonds with the Superior Court of Los Angeles County.

Companies make money by requiring you to pay a percentage of your bail upfront or seizing the collateral put up to secure it. Supporters of the new law say the system is inherently unfair to poor people who have fewer resource to pay.

Bob Hertzberg is the state senator who authored the new law.

“If you’re poor and innocent and not a flight risk, you don’t get out,” he said. “I’m sorry. On its face, that’s just unfair.”

Hertzberg said the current system is focused too much on a defendant’s ability to pay and not enough on assessing whether they are a danger to society.

Even though Brown signed the law, the bail industry is hoping it can avoid becoming obsolete. A coalition led by bail bond companies is working now to gather hundreds of thousands of signatures to put a measure overturning the law on the November 2020 ballot.