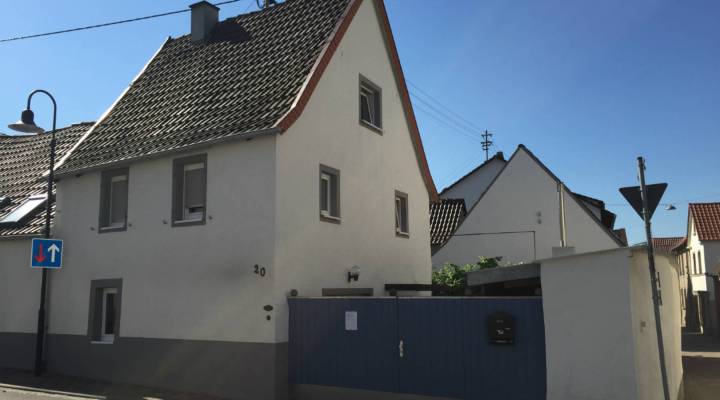 People come a long way for stuffed sow’s stomach, as you can imagine. This and the locally produced white wine. So, said Kallstadt mayor Thomas Jaworek, this village of just 1,200 inhabitants already has 300 beds in its hotels and 1800 places in its restaurants.

“Trump tourism?” I ask him.

But the fact that Donald Trump’s grandparents came from this tiny village not far from the River Rhine is starting to rival the sow’s stomach as Kallstadt’s claim to fame.

Ginette Holler of Kallstadt’s Weinhaus Henninger hotel and restaurant said, “[Our customers now] ask for the history and where the house is and go and visit the house, but most come for the wine and the good food.”

A view of Kallstadt, Germany.

Donald Trump’s link to this village only emerged relatively recently. Many people assume his origins must be English because he has such an English-sounding name.

“My grandfather Frederick Trump came to the United States in 1885, he joined the great gold rush, he did fantastically well. He loved this country. But you know what? I love Kallstadt also,” he told her. “Ich bin ein Kallstadter.”

This was a bit of a German coming-out for Donald Trump.

Donald’s grandfather Friedrich had already changed his name to Frederick and started pronouncing his surname Trump instead of “Troomp” when he returned to the village he’d left in 1885 to marry his childhood neighbor in 1902.

Their son Fred, Donald’s father, doing real estate business in a very Jewish New York after the second world war, told people the Trumps were from Karlstad in Sweden, an untruth Donald Trump repeated in an early biography.

But I hear in Kallstadt from a parishioner who wishes to remain anonymous, that later in the ’90s, the pastor of the Lutheran church in Kallstadt where the Trumps would have worshipped decided to ask rich Americans with links to the village for help with rehabilitating the church heating system.

Donald Trump made a contribution, this source told me.

And it is leaving this church that I meet an actual Trump tourist.

“I saw this German film about Kallstadt, and so I become interested in this small village. I wanted to see this village and how the people live here,”  Dr. Manfred Kerschreiter tells me.

I bump into Kerschreiter an hour or so later in front of the simple but solid house where Donald Trump’s grandfather lived.

He translates for me the printed sign stuck on the gate.

“I’m so fed up with press intrusion I’ve decided to sell the house,” it said. “Only ring the doorbell if you want to buy it.”

Let’s hope they sell it soon. They may have seen nothing yet.