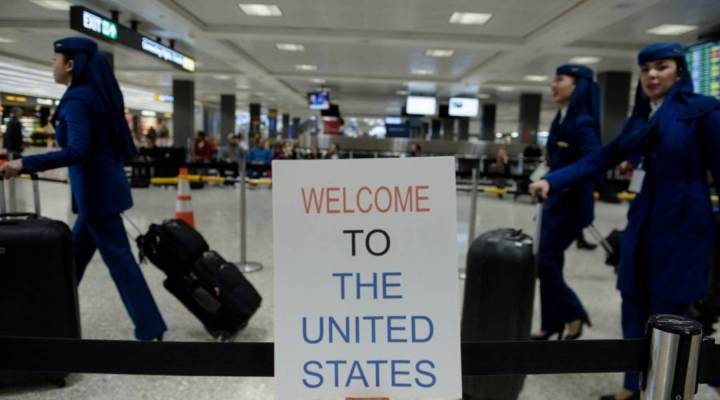 One of the spots tourists flock to in New York City is Grand Central Station. You’ll often find them in the Main Concourse, craning their necks to look at the green ceiling dotted with tiny golden stars or standing on the marble staircase looking down as hundreds of New Yorkers run to catch their trains.

That’s where where Luis Bechara, 29, and Vitor Saiki, 30, from Brazil were taking selfies one recent night during rush hour.

Bechara said they flew to the United States on a Mexican airline. Having heard President Trump’s stance on Mexico and his call for tighter immigration rules, they were a little worried. “We don’t know how people in the immigration center will receive us,” Bechara said. “But it was OK. They made some questions, but it was normal.”

They’re glad they came, he said, but it looks like some people may not take that chance.

Tourism Economics, a travel research firm, has revised its forecast for overseas visitors to the United States in 2017 after years of growth. The firm expects the number of international travelers to fall by nearly 2 million, and it estimates that the drop will cost businesses $2.5 billion.

The latest data show that flight bookings, travel searches and other indicators of interest in U.S. travel have dropped, said Adam Sacks, president of Tourism Economics. “All of these together are painting this picture of a shift in travel patterns away from the U.S.,” he said.

The strong U.S. dollar is one potential reason for slowing interest in international travel to the U.S. But Sacks said the political environment is a bigger issue. Based on his research, he attributes the drop to Trump’s America-first rhetoric: his talk about a border wall with Mexico, the travel ban, the notion of extreme vetting.

“It conveys a position of unwelcoming,” he said. “And so that’s affecting potential travelers.”

Some of those travelers are worried they’ll pay for airfare, hotels and everything else, and then they won’t be allowed into the country.

Nicolai Chen Nielsen, a 30-year-old Brazilian-Danish citizen working as a consultant for McKinsey in Dubai, said he and his wife were planning to visit friends in the U.S. this summer. “We had all the dates planned,” Nielsen said.

But Nielsen’s wife is a Swedish-Iranian citizen, and with the travel ban, they don’t know if they’ll be allowed in. He said a round-trip ticket from Dubai could cost $1,500.

“The whole notion of, you know, locking dates, planning a summer holiday and getting that cancelled, that’s the biggest impediment for me,” he said. “Then I’d rather use the week visiting friends somewhere else in Europe or visiting my family in Denmark.”

Other travelers are staying home as a form of protest.

Grant Hayter-Menzies, a 52-year-old Canadian-American citizen and an author, had been planning a book tour through the U.S. From his apartment in Vancouver, British Columbia, he said he cancelled the trip. “I couldn’t do it,” Hayter-Menzies said. “I couldn’t envision going across the border when my Muslim friends can’t.”

“Every day, people are making decisions about where they’re going to go, and if they choose to not pick New York for their 2017 holiday, you know, we’ll have to wait and try to get them again next year,” said Fred Dixon, CEO of the city’s tourism marketing agency, NYC & Co.

NYC & Co. is rolling out what it calls the “New York City: Welcoming the World,” marketing campaign in the United Kingdom, Mexico, Germany and other countries. “It was very important for us to remind people that if you do come to New York, you’re going to have a great time,” Dixon said.

First, the city will have to convince people to come.