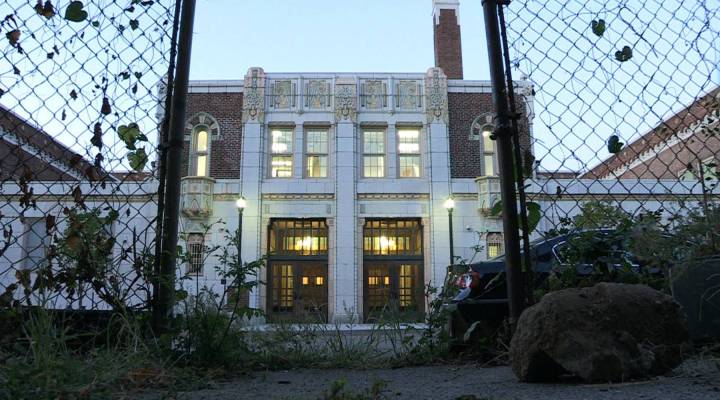 Oyler School at dawn. Glenn Hartong
One School, One Year

Since 2012, Marketplace has been following the turnaround efforts at Oyler Community Learning Center in Cincinnati. Part of the growing “community schools” movement, Oyler serves children from preschool through the 12th grade in the high-poverty neighborhood of Lower Price Hill.

To address low achievement and fight the effects of poverty, Oyler offers students health care and social services — from a vision and dental clinic, to a food bank and free clothing store — inside the school building. The school has hundreds of volunteer tutors, and pairs high school students with mentors and college access advisors. Student test scores climbed steadily from 2006 to 2011, before Ohio adopted the Common Core standards and new tests were introduced, but Oyler has struggled in recent years to make progress on state accountability measures.

Last week the school received another blow, when the state department of education released its annual school report cards. The 2015-16 report card gave Oyler a failing grade on every available measure, from overall achievement to on-time graduation rates.

“It’s hard to get traction when there is so much instability in the accountability system,” Walsh said.

Schools across the state saw declines in in their grades, Walsh said, both in struggling urban districts and typically higher-achieving suburban districts. More than 60 percent of schools in the state received Ds or Fs for achievement.

“It’s definitely demoralizing for the teachers and even the students,” Walsh said. “They’re working really hard against odds, and in many cases they are making progress, but not progress that shows up on the report cards.”

“This year’s report cards and the grades we’re seeing reflect a system in transition,” DeMaria said. “They reflect new tests, higher achievement targets and more challenging expectations. Improvement is happening, and with time, it will begin to show on the report cards.”

But the public is unlikely to be aware of those nuances, said Melissa Cropper, president of the Ohio Federation of Teachers.

“That’s not a message that a lot of people see,” she said. “They just see this grade card that comes out.”

That report card doesn’t reflect the progress Oyler School has made in a disadvantaged neighborhood where, just ten years ago, very few kids even finished high school, Cropper said. Today, dozens of students graduate each year and many enroll in college. In addition to offering health and social services, the school has worked to bring free internet access and stable housing to the community.

“That far outweighs, to me, an A on a report card,” Cropper said. “The hope is that, as you get many years down the road, you’ll start seeing those test scores going up, too, but the test scores themselves aren’t a good indication of all the positive changes that are happening in children’s lives.”

Future report cards could reflect more of those changes. The new federal Every Student Succeeds Act requires states to include at least one nonacademic measure, like school climate or access to college-level classes, in their accountability systems. New systems must be in place in the 2017-18 school year.