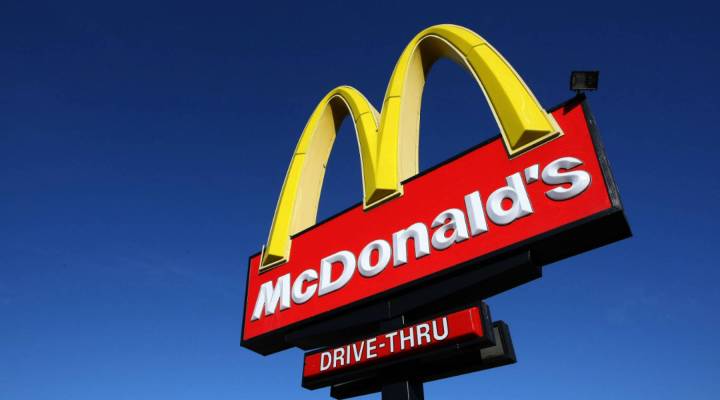 COPY
McDonald's new deal with Omnicon will include some aspect of pay-for-performance. Justin Sullivan/Getty Images

McDonald's new deal with Omnicon will include some aspect of pay-for-performance. Justin Sullivan/Getty Images
Listen Now

McDonald’s, the largest chain of fast-food hamburger restaurants in the world, recently selected Omnicom as the lucky winner of all its U.S. advertising business. Last year, McDonald’s spent almost a billion dollars on advertising, which makes it one of the most coveted accounts in the advertising world.

The deal created a splash, not just because it’s such a huge account, but because the true profitability of the deal is a bit of a question for Omnicom.

Contract details haven’t been released, but McDonald’s told Advertising Age that the deal will include some aspect of pay-for-performance. That means Omnicom’s profits could be based on something like how many trips we take through the drive-thru and overall sales. But that’s an arrangement Omnicom is willing to take.

“We want to get paid more, for more impact we create. So, I think pay-for-performance is really a great thing,” Wendy Clark said. Clark is the CEO of DDB Worldwide, the Omnicom agency handling the McDonald’s contract.

From the company’s perspective, however, it’s also a way to avoid the usual price gouging associated with giant ad buys, said Mark Ritson, a marketing professor at the Melbourne Business School.

“If the agency does a good job, you pay them, probably a bonus. If they don’t do a good job, then you’ve got a pretty sophisticated hedge which prevents you having to overpay,” Ritson said.

He also said having an iconic brand like McDonald’s in your stable can pay off in other ways, such as helping bring new business. As you might imagine, however, working for mystery returns isn’t for every agency.

“It limits our ability to make investments on behalf of the relationship and to put the best work and the best talent on there,” said Aaron Shapiro, CEO of Huge, a Brooklyn-based ad agency with clients such as Google, Lowes and Nike.

He said that linking pay to performance creates perverse incentives that might actually hurt sales.

“All a deal like this is doing is creating strong economic incentives for the agencies to cut as many corners as possible, to make it super price efficient, as opposed to being all about quality and breakthrough work that really moves the needle in the company’s business,” Shapiro said.

Shapiro said companies that are growing really quickly actually prefer a straight fee contract, because if sales go way up, they could actually end up paying more.