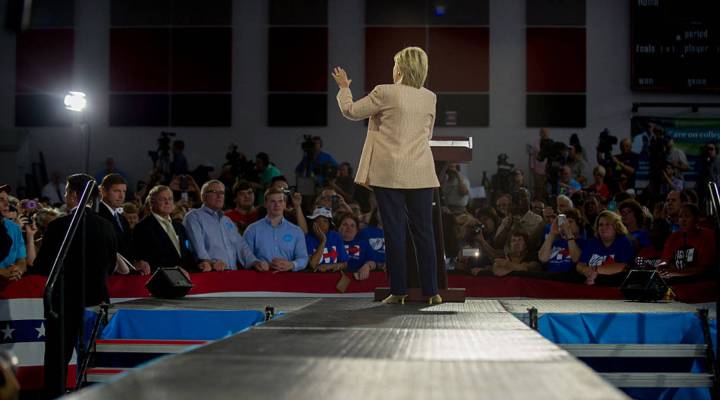 There are less than two months before voters cast ballots to choose the next president of the United States. Both Democratic and Republican candidates have expanded on their economic policies since they were each nominated to lead their party’s ticket back in July.

One of democratic nominee Hillary Clinton’s policy advisers on the economy is Jacob Leibenluft, formerly deputy director for the National Economic Council and an economic adviser to President Barack Obama. Leibenluft spoke to Kai Ryssdal about where Clinton stands on some economic issues. Here are some interview highlights:

Leibenluft: Secretary Clinton’s really laid out three key tests for any trade deal. She believes that they must create jobs, raise wages, and advance our national security. That’s for example why, upon looking at the details of the Trans-Pacific Partnership, determined that that deal didn’t meet her standards —

Ryssdal: After, we should say, she called it the gold standard?

Leibenluft: Yeah, but again, looking at the details of the plan and I think going forward, she has put forward a robust agenda in areas like trade enforcement, an area that in the past sometimes we haven’t done as good a job as we can. At the same time, I think in contrast to Donald Trump, she recognizes that 95 percent of the world’s customers are outside of the United States. And that’s part of the reason she’s focused so much on making real investments in things like infrastructure, in manufacturing, in innovations, elements that make us more competitive and able to more effectively sell our products to the rest of the world.

On not disclosing the content of paid speeches she gave to Wall Street.

Leibenluft: I think that if you look at the record on disclosure here, you have one candidate, Secretary Clinton, who has produced her tax returns, who much more is known about —

Ryssdal: No, no wait, I completely understand that, and I am absolutely not creating a false equivalence here and people will write and yell at me for this, but I’m specifically not going there. What I want to know about is this very specific issue about this candidate. Wall Street regulation and her disclosure of Wall Street speeches.

Leibenluft: Well, I think you should just look at what she has been clear about on the campaign. She has called for defending Dodd-Frank in the strongest possible terms, ensuring we don’t go back to the rules that existed before the crisis. She has called for additional steps, like a new bank fee on the largest financial institutions. She has a strong agenda here. She’s been running on it from the beginning, it’s consistent with the principles she’s laid out before and I think that the American people understand the difference between that and a candidate who has called for rolling back Dodd-Frank, getting rid of elements like the Consumer Financial Protection Bureau.

Click the audio player above to hear the rest of the conversation.