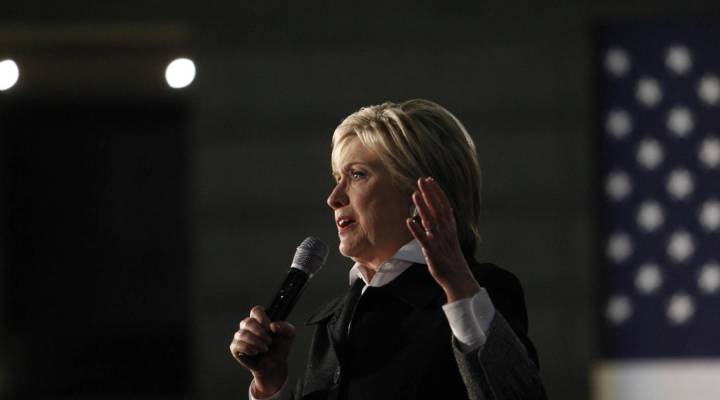 We heard earlier this week about Donald Trump’s plans for the economy, and Thursday, we’ll hear from Democratic nominee Hillary Clinton. Her campaign said her big economic speech in Detroit will focus on working families. But many will be listening for what she has to say about Wall Street. She’s been accused more than once of being in the pocket of the big banks.

Ross Levine, an economics professor at the University of California, Berkeley, said it’s going to be difficult for Clinton to prove she’s tough on Wall Street without alienating her supporters in the industry.

“Vilifying Wall Street and the financial services industry, while it might make good politics, could lead to policies that ultimately are detrimental to the average American,” he said.

But Clinton also needs to appeal to the anti-Wall Street voters, according to Kelly Dittmar, an assistant professor of political science at Rutgers University-Camden and a scholar at the Center for American Women and Politics.

“I think that [Clinton’s] still in the phase of reassuring some of the more progressive base in the Democratic Party, particularly the Bernie Sanders supporters, that she is going to be tough on Wall Street,” Dittmar said. So Clinton has to strike a careful balance.

And you might have noticed this speech is in Detroit — the same city Donald Trump chose for his big economic speech earlier this week. Berkeley’s Ross Levine has some ideas why the city is such a popular stage this week.

“Detroit is a city that has suffered — and maybe has suffered more than other cities because of changes in technology and because of openness to trade,” Levine said. That makes it a great place for both candidates to promise an economic comeback.