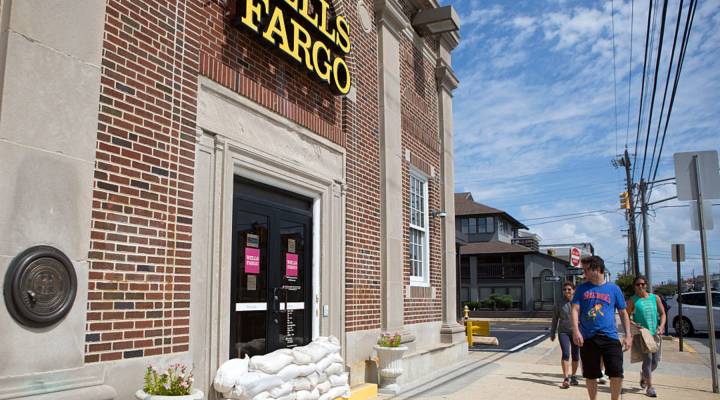 COPY
Low interest rates have caused banks to expand their sources of income aggressively- allowing many to become one-stop shops for financial services. Some banks, like Wells Fargo, have taken these efforts too far. Jessica Kourkounis/Getty Images

Low interest rates have caused banks to expand their sources of income aggressively- allowing many to become one-stop shops for financial services. Some banks, like Wells Fargo, have taken these efforts too far. Jessica Kourkounis/Getty Images
Listen Now

Retail banks have changed a lot since the days when songs were sung about the virtues of deposits and lending.

The largest banks make about half their profits from things other than simply the interest on the loans they make (minus the interest they pay on deposits, which these days is almost zero).

There are many reasons for this – competition, for one.

“Go to big cities and you’ll find a Bank of America, a Chase, and a Citigroup all on the same block,” said Morningstar senior analyst Jim Sinegal. “It used to be local community banks had a monopoly on local markets,” but that’s changed and so now “banks are fighting for every penny they can make out of their customers.”

Another driver, said Sinegal, is the low interest-rate environment.

“In the old days there was a joke about bankers – borrow at three, lend at six, and be on the golf coursee by three,” he said. “Low interest rates have really hurt that business model.”

In some ways this is good for consumers. Banks have become a one-stop-shop for financial services, and they get to know you and offer you things you might actually need, said David Hilder, a director in the capital markets group at Drexel Hamilton. “It all comes down to building deeper relationships with a core group of customers,” he said.

But it can, obviously, go too far like it did at Wells Fargo, said Morningstar’s Sinegal. “Over the last decade really the banks have been far too aggressive in looking for new sources of income; it’s the same sort of thing that led to the mortgage crisis.”

Banks are not what they used to be. But then again, nothing is.