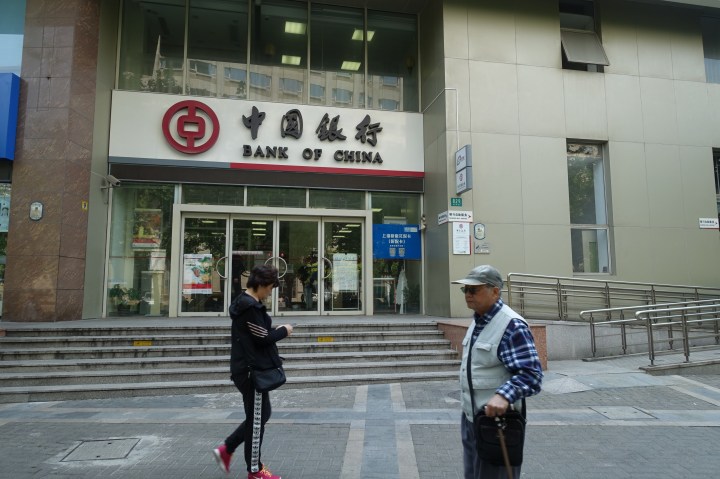 COPY
A Bank of China Shanghai branch is one of the big state-owned banks that sells instruments called wealth management products, which are very popular among ordinary Chinese investors. Charles Zhang/Marketplace

A Bank of China Shanghai branch is one of the big state-owned banks that sells instruments called wealth management products, which are very popular among ordinary Chinese investors. Charles Zhang/Marketplace
Listen Now

Investment products that give guaranteed yields of between 3% and 5% might sound too good to be true. In China, however, a lot of ordinary investors believe this is possible with wealth management products, or WMPs.

There is a perception among the Chinese public that WMPs are shielded from losses — citizens often treat WMPs as bank savings deposits with higher returns.

China’s government has indicated otherwise, but their warning has fallen on deaf ears.

There are no official statistics on how many people buy WMPs, but individuals held nearly 90% of the value of WMPs in 2018.

The industry is now worth nearly $3 trillion dollars, which worries China’s government.

Typical WMPs offer a fixed rate of return over a short period. Many WMPs are sold through state-backed banks.

It is unlikely that WMP contracts indicate that returns are guaranteed, but according to Meng Xiangjuan, chief financial analyst with SWS Securities, some banks had in the past aggressively marketed the products to potential investors as having zero risks.

She said the perception that WMPs are safe persists today, even if many investors have no idea what the returns are based on.

Investors who spoke to Marketplace appear to base their faith on the banks.

“In the past, banks were all state-owned. There have been gradual ownership reforms, but ordinary people still think anything done through the bank is safe,” Meng said.

Why do WMPs worry the Chinese government?

WMPs are invested in anything from bonds to loans for troubled sectors like property, construction, or even inefficient state-owned enterprises.

“It was sort of creating … a shadow banking system where money is being deposited with these wealth management funds and then it’s being passed along to borrowers, and other kinds of investments, in a way that’s often pretty unclear and unregulated,” said managing editor of the Journal of Economic Perspectives, Timothy Taylor.

There is also a mismatch in funds where WMPs mature in a short period but are invested in long-term projects.

At times, new WMPs were issued to pay off maturing products to avoid a liquidity crunch, a senior communist party member warned in a rare public commentary published in the China Daily in 2012.

“To some extent, this is fundamentally a Ponzi scheme,” he said.

So far, there has been no big-scale loss in WMPs because banks have stepped in to cover for shortfalls, protecting their reputations.

What has the Chinese government done about WMPs?

Banks are currently required to stipulate clearly on WMP contracts that there is no guarantee on returns.

If a WMP goes bad, banks are not allowed to transfer money from other parts of its operations to cover the losses.

In recent years, officials have reminded the public that they cannot expect that the state or banks will cover WMP losses but this warning has been largely ignored.

Again, there is a lot of faith that the state will make things right.

In the past, governments at either the local or central level have stepped in to help ailing companies, or cover bad investments, to avoid mass unrest.

Why do WMPs remain so popular?

Chinese citizens save a lot, and because it is difficult to move their money abroad, they have limited investment options.

Since the stock and property markets are volatile, WMPs are treated as a safer option for savers who want higher yields to beat inflation and wage growth.

WMPs typically offer returns of between 3% and 5%, which is more than double that of one-year bank deposits.

Savers are eager for high yields because although the country is run by China’s Communist Party, households must pay a high price to afford good education, medical care and retirement.

“The really hard question is: Can you get people used to the idea that things might lose money without actually having a crisis where people really do lose a lot of money?” said Taylor.