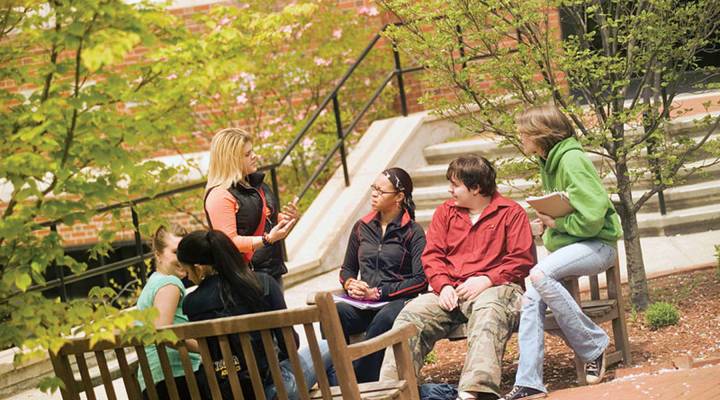 Kerry Ann Rockquemore’s experience as a college professor was “quite frankly, just miserable,” she said.

She loved teaching, but the tenure process was maddening. Imagine, she said, working hard for six years, trying to be a great teacher and serve on every committee and publish important research, all the while worrying if you ask for help will that look like weakness? Can you say no to this dinner invitation from a colleague?

“Then at the end of that time, a group of people are going to go in a room, close the door,” and vote, she said.

“If you have more yeses than noes, you have a job for life, and if you have more noes than yeses, you need to go do something else with your life,” she said. “Just imagine that: This vote that nobody is accountable for, that’s completely anonymous and that no one has to explain.”

Rockquemore survived that vote, got tenure and went on to teach sociology for eight years at the University of Illinois at Chicago. But a lot of her colleagues either didn’t get tenure or left before they got there.

“I felt a huge responsibility to do something, particularly because the people I saw leaving and not getting tenure were often women and faculty of color,” she said.

What Rockquemore did was start the National Center for Faculty Development and Diversity. The Detroit-based company offers workshops and intensive mentoring to help more women and people of color not just survive the tenure process, but enjoy their lives as professors along the way.

“I mean, having explosive productivity and having a life,” she told a gathering of women faculty of color in a recent seminar at the University of Illinois. “And let me be clear what I mean by having a life, because some people haven’t had one in so long.”

Now six years old, the center has a network of more than 90,000 grad students, post-docs and faculty members. It partners with 80 colleges and universities – from Amherst to Stanford to Virginia Tech – that sponsor training for their faculty.

“The impact really comes in retention,” said Douglas Haynes, vice provost for academic equity, diversity and inclusion at the University of California, Irvine.

In the past two years, about 35 professors have gone through the 12-week Faculty Success Program, also known as “boot camp,” Haynes said. The university offers grants to help cover the $3,250 tuition.

“It really represents an investment that the institution is making in the individual faculty member,” he said.

Universities are under growing pressure to diversify their faculty. Last year, many student groups that protested the racial climate on college campuses demanded more hiring and promotion of professors of color. Nationally, just 4 percent of full-time professors are African-American or black. Just 3 percent are Hispanic or Latino.

Just recruiting more professors of color isn’t enough, Rockquemore said. Institutions have to do more to help those professors stay. Balancing the workload as a new professor can be tough for anyone, but at predominantly white universities, African-American or Latino professors may face extra challenges.

“Oftentimes, students don’t take you as seriously as they might take a white male professor,” said Edna Viruell-Fuentes, an associate professor of Latino/Latina studies at the University of Illinois at Urbana-Champaign. She participated in a faculty success boot camp before she got tenure.

Students sometimes call her by her first name, Viruell-Fuentes said, or act surprised when they learn she’s a professor. At the same time, minority students often seek her out as a mentor, or bring their personal struggles to her office.

“They feel much more comfortable coming to us,” she said.

Viruell-Fuentes said she appreciates the opportunity to help students, “but it just adds, again, another layer of expectations that other colleagues in other departments may not necessarily have,” she said.

Then there’s committee work. If you’re the only professor of color on a campus or in a department, or one of few, you’re in high demand — especially for committees that have anything to do with promoting diversity. All these responsibilities can actually hurt a tenure candidate, Rockquemore said.

The boot camps focus on managing those competing demands: How to prioritize research and writing, say no to people in power, cultivate a network of mentors, and — it sounds simple but it’s really important — get enough sleep.

“She’s like, ‘Ultimately, your brain is what you’re working with, and so you have to protect your brain and your well-being,’”said Whitney Robinson, an assistant professor of epidemiology at the University of North Carolina, Chapel Hill.

Robinson went through Rockquemore’s boot camp years ago and does an alumni program every semester. She also keeps in regular touch with other alums online.

“These are people I have never met in person, but I know when they’re frustrated about their chair, or the printer’s not working, or they’re really struggling with a ‘revise and resubmit,’ or a paper rejection,” she said. “We’ve made this amazing virtual community.”

Robinson is up for tenure next year, and feels pretty confident going into her review. Still, “it’s a little stressful,” she said, laughing.

Yeah, because remember: job for life or time to find something else to do.