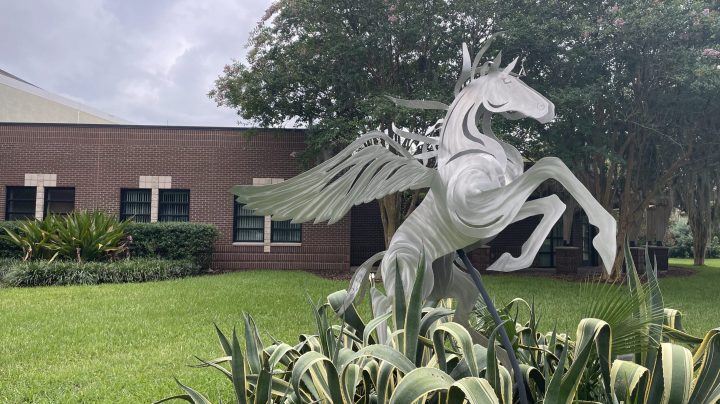 COPY
A Pegasus statue at the University of Central Florida, one of the schools affected by a state law constraining professors' tenure. Stephanie Hughes/Marketplace

A Pegasus statue at the University of Central Florida, one of the schools affected by a state law constraining professors' tenure. Stephanie Hughes/Marketplace
Listen Now

Tenure is a concept that U.S. higher education embraced more than a century ago. It’s meant to give faculty members academic freedom. That means if they are teaching or doing research in controversial areas, they have job protection (though they can still be fired for certain reasons). These days, only 2 in 5 American professors have tenure or are on track to get it, but it’s still extremely controversial.

Florida has a new law that could make it harder for professors to retain tenure. Other states, like South Carolina, have considered eliminating tenure entirely.

Yet, tenure remains a status that future professors like Autumn Shackelford aspire to. At the University of Central Florida in Orlando, she’s cleaning instruments in a planetary science lab.

“We rinse them with methanol and bake them off in an oven to make sure there’s no lingering chemicals or anything like that,” Shackelford says. “Everything has to be superclean because it has to be like space.”

Shackelford, who has three years to go in her Ph.D. program, says granting a professor tenure broadcasts to the rest of the world: This person and their work are worth investing in, even if there’s no immediate practical purpose.

“You’re able to say this university wants to keep me around,” she says. “That tells you, oh, this person is going to be there for a while. This will be work that can continue for a long time. And this is science that can pay off in the long run.”

Shackelford is one of 70,000 students at UCF, which is so big, many of them use golf carts to zip around. Anastacia Thompson is on foot, standing outside the campus bookstore. She’s getting ready to start her freshman year, and like a lot of undergraduates, she’s not that familiar with the concept of tenure. But she says she’s OK with it if it means a better-quality teacher.

“Because I’m paying for a good education, I want someone who’s actually going to be able to teach me, whose reputation is good as well,” Thompson says.

Getting tenure takes years. Professors need a proven track record of teaching, research and providing service to the school community. That includes publishing work on a regular basis.

In April, Florida Gov. Ron DeSantis signed a law stipulating that tenured faculty at public universities must be reviewed every five years.

“Tenure was there to protect people,” he said during a press conference at the bill signing. “So that they could do ideas that maybe would cause them to lose their job or whatever and academic freedom. I don’t know that that’s really the role that it plays, quite frankly, anymore.”

Nearly 70% of public colleges in the U.S. already have some kind of review in place. That includes the University of Central Florida, where Joseph Harrington has been tenured for over a decade. He’s a professor and physicist who came to UCF to start a program in planetary science. Harrington is concerned that the tenure law will deter potential colleagues from joining the faculty, as might another new state law called the Stop WOKE Act, which restricts how professors approach subjects related to race.

“We’ve already had a situation where a senior professor from elsewhere who was applying for a job here told us that they were not as excited about the idea of coming here, having heard this. This was just a couple of weeks ago,” said Harrington. “So it has hit our recruiting already that this rhetoric is out there.”

Those who study the humanities are also concerned, including Rachel Hartnett, a doctoral candidate in English at the University of Florida, who will be applying for tenure-track faculty positions this fall.

“I’m really reconsidering whether or not I actually want to apply to jobs in the state of Florida,” Hartnett said. “I know that if I were to get a job, even a tenured job, that tenure is not necessarily secured.”

Colleges are also competing with the corporate world for talent, and physicist Joseph Harrington said that he and other scientists could make three times as much money working in industry instead of academia.

“I really think that if we didn’t have tenure, to be able to hire people with the same skills we would have to pay more because that’s part of the economic trade-off,” Johnson said. “People, in a sense, settle in their careers for a somewhat reduced salary, compared to what, say, Intel or Amazon would pay.”

“You need to be a little bit uncomfortable,” Thompson said. “Sometimes you have to hear stuff that you don’t want to hear to be able to be like, oh my gosh, I didn’t think of it that way.”

Increasing diversity of thought also means increasing the diversity of faculty. In 2020, about 40% of tenured professors across the U.S. were women and about a quarter were people of color.