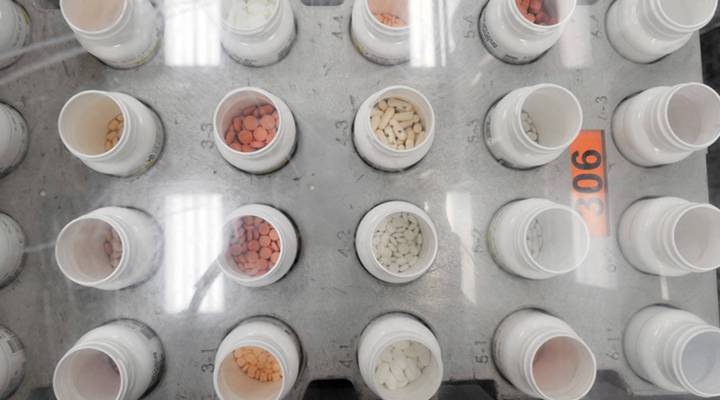 COPY
A lawsuit filed by the Center for Health Law & Policy Innovation alleges that some insurers are refusing to cover high-priced medications for HIV/AIDS patients. STAN HONDA/AFP/Getty Images

A lawsuit filed by the Center for Health Law & Policy Innovation alleges that some insurers are refusing to cover high-priced medications for HIV/AIDS patients. STAN HONDA/AFP/Getty Images
Listen Now

This morning lawyers at the Center for Health Law & Policy Innovation of Harvard Law School filed a complaint with the U.S. Department of Human Services alleging that seven insurers in eight states, including Humana, Cigna and Anthem, are discriminating against people with HIV/AIDS by “refusing to cover key medications and requiring high cost sharing.”

Of course, consumers can avoid some of these high-priced plans by shopping around, but patient advocates worry about the implications as insurers abandon the market.

A recent New York Times analysis showed 17 percent of people may have just one insurer to choose from when open enrollment begins this fall.

The lawsuit charge insurers with intentionally designing coverage to steer people with HIV/AIDS away from enrolling in their plans.

In its lawsuit, the center accuses Humana in Alabama of “placing even generic HIV medications on the highest level of ‘specialty’ cost haring, making obtaining necessary treatment objectively unaffordable for the average person living with HIV.”

Center attorney Kevin Costello said under the ACA, it is illegal to target the sick.

“What the Affordable Care Act says is you are not allowed as an insurer to discourage enrollment for high-cost populations.”

Houston-based Community Health Choice said it rejected the premise, and said many of its clients have HIV/AIDS.

The carrier said its plans have been reviewed and approved by federal health officials at the Centers for Medicare and Medicaid.

In a statement, Dr. Don Liss, vice president of Pennsylvania-based Independence Blue Cross, said the company treats HIV drugs like all other drugs, “those available as generic are placed on our generic (formulary) tier, brand-name drugs are divided across the two brand tiers. No HIV drugs are placed on our specialty drug tier.”

Since the enactment of the ACA, health policy experts have talked about new ways insurers may try to “cherry pick” the healthiest consumers.

“It is not surprising that carriers would try to attract healthy people and try to dissuade sicker people from enrolling in their plans,” said Stanford economist Maria Polyakova.

But of course, as some insurers say they are bleeding money — and some big players are leaving the exchanges, Polyakova said it’s hard to find policy solutions.

In Philadelphia, Dr. Karam Mounzer, chief medical officer at the Lax Clinic, said many of his patients are stable as long as they take their medicine.

If insurers are designing plans that make it hard for patients to get essential HIV/AIDS treatment, he said their health could be in jeopardy.

“We’re setting them up to fail, and when you fail HIV treatment, your rate of complications go up,” he said.

“You are diminishing the life expectancy, you can impact negatively their quality of life, and that’s immoral.”

Mounzer worries some insurers steering HIV patients away will force others to follow suit or risk taking a big financial hit.

He worries this has the makings of a race to the bottom.

While this is theoretical for policy wonks, it’s all too real for consumers like 32-year old Birmingham, Alabama, resident John Dunnam, who tested positive for HIV in 2008.

When it came to out-of-pocket exposure, the choice was obvious, said Dunnam.

“If I was to be on a Humana silver plan, my medicine would cost me $1,500 a month. A lot of people in Alabama cannot afford that. I am one of those people,” he said.

Thanks to the help of additional federal subsidies, Dunnam enrolled in the Blue Cross gold plan.

But this year, both United and Humana are pulling out of the exchange market.

Dunnam said he’s braced for the worst but wants insurers to remember one simple thing.

“We have to take these pills to stay alive.”