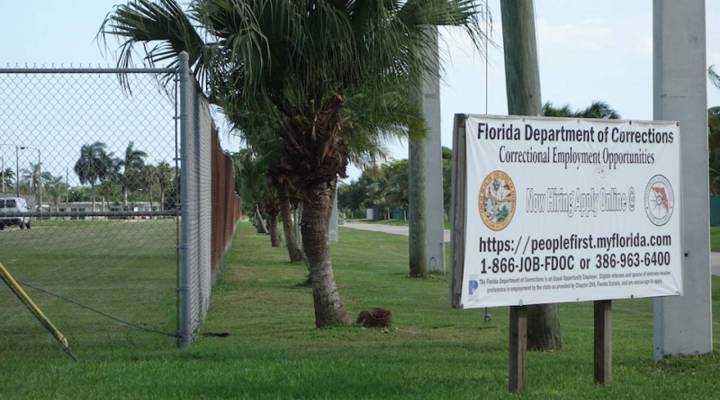 COPY
The turnover rate among corrections officers in Florida was 22 percent last year. The department has said it plans to hire 4,000 officers in the coming year, to fill current vacancies and to prepare for future ones. Alisa Roth

The turnover rate among corrections officers in Florida was 22 percent last year. The department has said it plans to hire 4,000 officers in the coming year, to fill current vacancies and to prepare for future ones. Alisa Roth
Listen Now

This is the second in a three-part series. Check out parts one and three.

It wasn’t that she didn’t like the old job, she just couldn’t afford to keep it.

“To be honest,” she said, sitting outside the county jail where she currently works. “I was close to losing my house. There were times that I couldn’t afford to put food in my refrigerator.”

Murray says that by the second year in her new job, she had nearly doubled her old salary, even though her job supervising inmates was essentially the same. One difference: the hours.

“I always worked days when I was with the state cause I had seniority,” she said. “But coming here, since I have no seniority, I’m on nights.”

I talked to her outside the jail late one evening, when she was on a break. It was dark out, the Florida summer air still hot and humid. Except for the bugs, there wasn’t much activity outside.

The starting salary for a Florida corrections officer is $28,000, and there hasn’t been a substantial raise in years. So officers all over the state have been leaving, to take all kinds of jobs.

That shortage, said some union leaders and lawmakers, puts officers in danger. Already this year, there have been at least three cases of near-riots in state prisons.
At a legislative committee hearing in January, a state senator asked Corrections Secretary Julie Jones about one of those incidents. Had the prison been fully staffed when it occurred, he wondered.

“Were we staffed to critical compliment? Yes,” she answered. “Were we appropriately staffed? Sir, no.”

When the state had more officers, she said, one could leave a post briefly, for example, to deal with an inmate, and there would still be sufficient staffing on the unit. “We don’t have those positions anymore to do that,” she said. Instead what’s happened is that crisis staffing levels have become the norm.

She knows the state needs more officers, which is why she’s promised to hire 4,000 new ones in the coming year.

As a lieutenant in the state system, Lisa Murray said, she had to find ways to cut corners.

When Daniel Talleda worked as a Florida state corrections officer, he regularly had to do mandatory overtime, with little notice and low pay.

“Okay, well, what am I going to leave unmanned?” she asked, rhetorically. “I can’t leave a dorm. But, you know, where a dorm is supposed to have two maybe three people, I’ve got one.”

That’s dangerous, but it’s also demoralizing, because it means officers end up working harder and longer. They also end up having to do mandatory overtime at the last minute.The Department of Corrections says it’s planning to hire 4,000 new officers in the coming year, to fill empty positions and to replace the officers who keep quitting. Talleda says no mandatory overtime is one of the biggest appeals of his new job. The money isn’t that much better—only about a dollar an hour higher than his old job. But he also gets regular raises and bonuses; he’s no longer commuting three hours a day; and doesn’t have to work nights.

Daniel Talleda, a state corrections officer who quit to become a cable guy at Comcast, said he would sometimes get as little as 10 minutes notice.  “I’m telling you,” he said, “If you were due to leave at 8 o’clock, you would wind up at 7:50 getting that phone call and, the captain would tell you, ‘You gotta work a double.’ It might happen twice a week.”