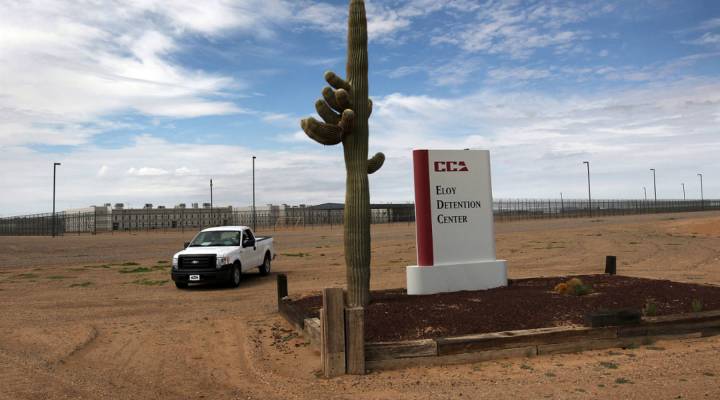 COPY
A view of the Eloy Detention Facility, which is operated by the Corrections Corporation of America. John Moore/Getty Images

A view of the Eloy Detention Facility, which is operated by the Corrections Corporation of America. John Moore/Getty Images
Listen Now

Stocks in private prison corporations soared with the news of Donald Trump’s win. The country’s largest, Corrections Corporation of America, shot up almost 45 percent Wednesday. The companies that run private prisons are actually in the real estate business, and their business boomed in the 1990s and early 2000s with the exponential growth in mass incarceration at the state and federal levels. But the industry took a hit after the U.S. Justice Department in August said it would end its use of private prisons. In general, a national shift towards criminal justice reform and reduced prison populations has suggested a slowdown.

Now it’s possible the federal government will do a 180, as Donald Trump has expressed his support for privatization in government services in general, and prisons in particular.

Still, the federal government doesn’t have the power to ramp up privatization across the board, because the vast majority of U.S. prisoners are in state, not federal, facilities. One area that could be huge for these companies, though, is immigrant detention: many detention centers are private, and Trump wants to detain and ultimately kick out millions of people.