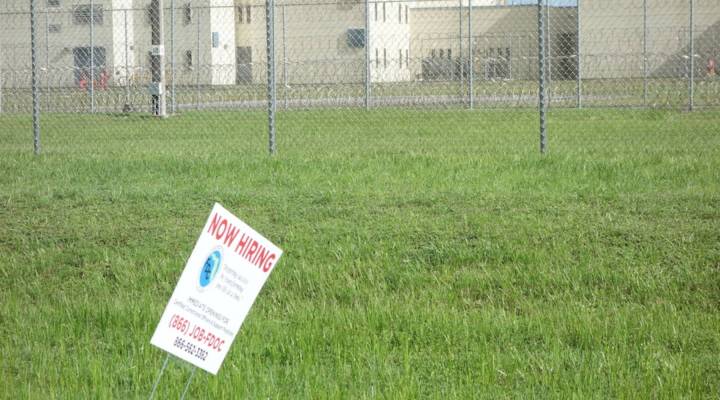 COPY
Signs posted around the perimeter of the Dade and Homestead prisons in south Florida advertise immediate openings for correctional officers. The state, like most, has a severe shortage of officers, leaving officers and inmates at risk. Alisa Roth

Signs posted around the perimeter of the Dade and Homestead prisons in south Florida advertise immediate openings for correctional officers. The state, like most, has a severe shortage of officers, leaving officers and inmates at risk. Alisa Roth
Listen Now

This is the first in a three-part series. Check out parts two and three.

Driving up to the compound in south Florida that houses the Dade and Homestead prisons, you’ll see the job ads. Stuck like campaign signs in the lush green lawns outside the perimeter fences, they said “Now Hiring,” in big red letters, along with a phone number to call for more information.

The signs are part of a campaign by the Florida Department of Corrections, the agency that runs the state prisons, to hire 4,000 correctional officers in the coming year. These aren’t new positions, but rather a push to fill vacant positions — the department has a serious officer shortage — and to prepare for future vacancies.

The agency has been hiring people, more than 3,000 in fiscal year 2015-2016. But people are quitting almost as fast: Turnover in the department last year was 22 percent.

But the starting salaries are low, and there have been no significant raises for several years, which makes it tough to hire.

To find applicants, “the department holds job fairs statewide,” said Captain Cheryl Marshall, who is in charge of recruiting for prisons in the southern part of the state. “Also, we get invited to different events within the community.”

Captain Cheryl Marshall is responsible for recruiting corrections officers in the southern part of the state. She said she regularly goes to job fairs and other events, and tries to encourage officers to spread the word among family and friends.

She said she always carries business cards, in case somebody stops her when she’s at lunch, and she encourages officers to tell their family and friends that the agency is hiring.

“What I tend to do,” she said, “I try to take the focus off the pay, and just focus on the benefits that the department offers.”

The biggest one, she said, is that there’s room for promotion, and officers can transfer to prisons all over the state, so “if you just be patient, you will be rewarded in the long-term.”

Hiring, though, she said, is actually the easy part. The hard part is retention.

An independent study, commissioned recently by the legislature, confirmed that low pay was a significant barrier to keeping officers. At a legislative committee hearing in January, one of the consultants who worked on the report testified that many officers leave to work in county jails, which pay more for what is essentially the same job.

“In effect,” the consultant, Karl Becker, told legislators on the criminal justice committee, “the department is serving as a training ground for many of the large metro counties for their hiring.”