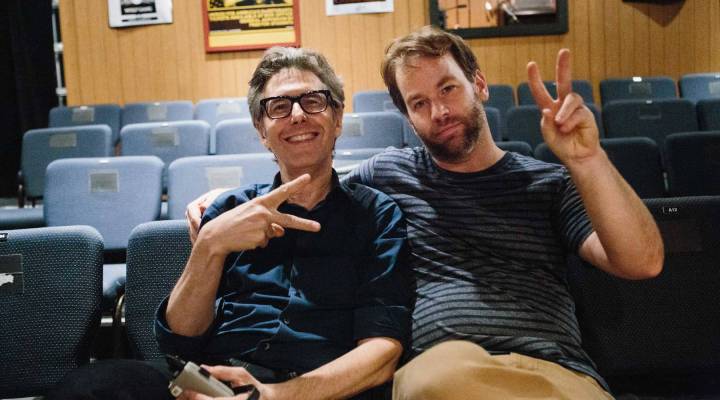 COPY
Ira Glass, left, and Mike Birbiglia previously worked together on the film "Sleepwalk With Me." Adam Kersh/Brigade Marketing
The Marketplace Quiz

Ira Glass, left, and Mike Birbiglia previously worked together on the film "Sleepwalk With Me." Adam Kersh/Brigade Marketing
Listen Now

No matter who you are, you’ve probably had a rough day at the office that changed your perspective, or maybe you made an impulse purchase you really, really wish you could take back. This week, we talked with comedian Mike Birbiglia and “This American Life” host Ira Glass. Together, they filled out our questionnaire inspired by experiences with money and work.

Mike Birbiglia wrote, directed and acted in the new film “Don’t Think Twice.” Ira Glass produced it. The movie is out now.

Ira: Money can’t buy you happiness but it can buy you ____

I: Oh, I see by your hesitation you’re about to say something dirty, and you’re stopping yourself, aren’t you?

I: OK, I accept that answer.

M: Ira what was your first job?

I: It depends on how you count it. Probably the very first thing I did for money as a job was I did magic tricks at kids parties all around suburban Baltimore and was paid up to I think $15 per show.

But the first job-job I had was I worked in a Baskin-Robbins. We had a game that we would play actually, that was a very fun game — Birbiglia. If you and I were like working behind the counter, the way the game would go is a bunch of people would enter the store during a rush and I would choose any customer and point them out to you. Then your job in the game is that whatever that guy wanted to buy, you had to sell him Pralines and Cream.

I: Then you had to give him a taste and talk him up, and it would be really fun ’cause most people when they go into an ice cream store, they don’t have a thing they know they want to get, and just a nudge in any direction…

M: Well, you know that’s the dangerous thing about the specials when you’re eating in a restaurant. I was a waiter for many years. Often the specials are food items they’re trying clear out of the kitchen.

M: A lot of the times they’ll come up to you and go, “Hey, the clam chowder is our special today.” Really they just want to not have any more clam chowder in the kitchen.

I: Hey Mike, what’s the hardest part about your job that nobody knows.

M: Dealing with you.

I: I feel like you’ve been doing this bit for so long, I feel like now it’s starting to turn into the truth in your head.

M: No, but you have to remember, you’re the closest thing that I have to having a boss.

I: I am no way your boss. What are you talking about?

M: You are. I don’t have anyone above me. I’m the director of the movie. The only person above me is the producer.

I: But I’m not above you. I give you notes just like anybody else.

M: I know, but I defer to your notes much more than other people’s because I think that you are a Jedi of story.

I: But why then would it be hard to deal with me if I’m giving you helpful notes?

M: Because sometimes notes are hard to take in.

M: OK, Ira, what is something everyone should own no matter the cost?

I: I guess a toothbrush. You really need a toothbrush. If you don’t brush your teeth they’re going to fall out and then where are you going to be? A toilet would be a good thing to own, too.

I: Or you don’t have to own it, the toilet, I guess it just comes with the apartment.

M: Yeah but you also need the plumbing.

M: You can’t just own the toilet in isolation. I tried doing that at Home Depot once. I brought it home, threw it in the living room. No dice.

I: Bobby Nasdoor, when I was going up, the kid across the street was the little brother of my friend Mark. And a famous story in the family was that they went to a department store, and you know how they [had] all those display toilets and bathrooms, and he went, he pooed in the department store bathroom. That was like decades ago, and I still remember it, and I’m mentioning it on Marketplace.

M: That is the greatest scatological anecdote of all time.

I: When did you realize comedy could be an actual career?

M: When I was working as a door person at the Washington, D.C., improv when I was 20 years old. Because I was, like, “Oh, you can do this and see shows for free?” I’ll take it.

I: Wait, wait, you thought the career was being the door guy?

M: Yeah, yeah, I was like, “I’ll do this. This seems great. I’ll make minimum wage and watch free comedy forever.” Honestly, that was part of it though. Because I would see, like, Brian Regans, and the Mitch Hedbergs, and the Dave Chapelles who were the headliners, but then I’d see that the opening acts would make $300 for a week or $400 for a week, and I was like, “I could be as good as the opening acts.” So I went on the road, I drove around the country in my mom’s station wagon, and I was the opening act, and then eventually I became the headliner.

I: You remember the first time you were paid to perform?

M: At Fat Tuesdays in Virginia. They were having a comedy night, it was, like, every Tuesday night it was a comedy night, and I was asked on short notice to be the opening act. I think I was paid, like, $120, and I couldn’t believe it to have $100 cash.

M: It was very exciting.

M: Ira, what have you recently bought that you now completely regret buying?

I: I did buy a pair of pants online that I returned.

M: Do you regret it?

I: Well, it was an experiment buying pants online. Like, up until, literally a month ago I wore exactly the same thing every single day. It was a uniform that I created for myself, just to, like, not have to think about what I was going to wear, and it was just a pair of jeans and a white shirt or a blue shirt. Then a couple weeks ago I was, like, “I’m going to branch out and get other clothes,” and it included buying a pair of pants online, and I sent it back.

M: Wow. Now that the listeners are tuned out, we’ll continue.

I: With a boring story. OK, what’s the next question.

I: Hey Mike, what’s your most prized possession?

M: I don’t have a prized possession because you can’t hold onto a hug. It happens in a moment and it disappears.

I: The greeting card writes itself.

M: I don’t buy into your consumerist constructs, Ira. Nor Marketplace’s. I’m still hoping that Bernie gets the nomination. It’s not too late, America.