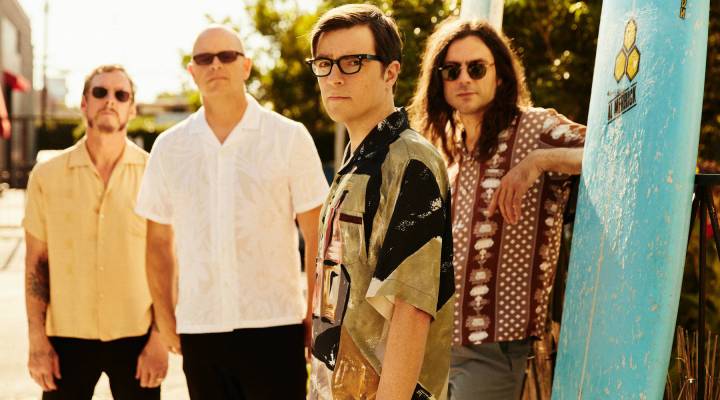 COPY
Rivers Cuomo (second from right) said the most surprising thing about being a musician is the amount of time spent in front of a computer. Photo courtesy of Jeremy Cowart
The Marketplace Quiz

Rivers Cuomo (second from right) said the most surprising thing about being a musician is the amount of time spent in front of a computer. Photo courtesy of Jeremy Cowart
Listen Now

The rock band Weezer has been around since the early ’90s but front man Rivers Cuomo said when it comes to doing business not much has changed from the band’s early days. Cuomo’s business is writing songs, he said, “in fact, it’s very similar to how it was when I started in ninth grade in 1984.” Their new album, “Pacific Daydream,“ just dropped so we asked Cuomo and band member, Brian Bell, to sit down with us to take our money and career inspired personality questionnaire.

Rivers Cuomo: It can pay for the private plane to your gig so you don’t have to do a bus tour or van tour. I just saw that SpaceX is going to make this rocket, or they have the rocket but they’re going to set it up so that you can get from LA to Tokyo in 24 minutes or something. So …

Bell: We’re going to be the first band to tour in the SpaceX rocket. That’s our goal.

Cuomo: The touring is going to be crazy.

Cuomo: In the next life, what would your career be?

Bell: I think an architect.

Bell: It’s all connected. You know, I guess I first got interested in house architecture by delivering food in Laurel Canyon, way back in the early ’90s. I got to go into some of these houses and I had no idea that a house could cause, you know, a feeling of creative space. It was a good job delivering food — you were on your own and you think a lot.

Cuomo: I delivered pizza for Domino’s and on New Year’s Eve I got a $20 tip. I’ve never forgotten that, it’s just made my life.

Bell: Rivers, how have you seen the business of your music change … from when we started?

Cuomo: I don’t know I’m not really focused on the business. My business is writing songs and playing shows and it’s pretty much the same as it was when you started in 1992. In fact it’s very similar to how it was when I started in ninth grade in 1984. I never would’ve guessed that I’d spend so much time sitting at a computer all day, as a musician.

Bell: I don’t think anybody thought that.

Cuomo: Yeah, but you know I guess when I was a kid I thought computers were cool so I’d probably be happy about it.

Bell: Rivers, this is a good question I think: What advice do you wish someone gave you before you started your career?

Bell: Yeah. It would be nice to have some sage come say “yeah you guys are going to make it. Everything’s going to be just fine.” But you know it’s part of the struggle and life in general, right?