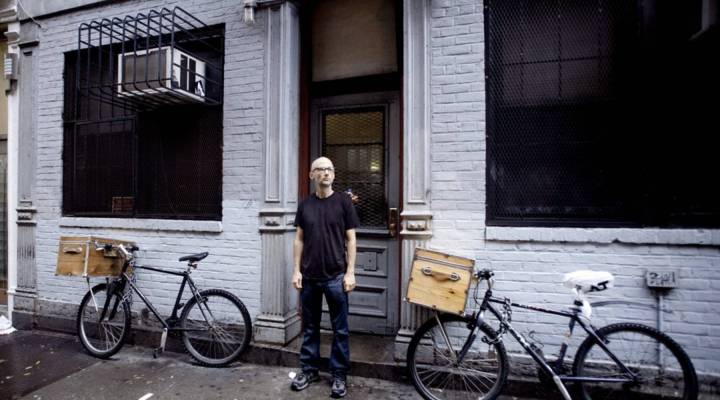 No matter who you are, you’ve probably had a rough day at the office that changed your perspective, or maybe you made an impulse purchase you really, really wish you could take back. This week, we sat down with Moby and had him fill out our questionnaire inspired by experiences with money and work.

His memoir, “Porcelain,” is out now.

Either I would lead white-water rafting trips through the Grand Canyon, or I would be the first democratically-elected dictator of the entire world. Or maybe both, at the same time.

One is how solitary it is, and I’m not really complaining, but I do envy people who work in more gregarious environments because the things that I focus on, whether it’s writing or making music, I do exclusively by myself. So I think of musicians who are in bands, or people who are comedy writers on comedy shows, or anything that’s more collaborative and gregarious, I kind of envy them being able to work in a convivial environment, as opposed to sad, isolated, ascetic me stuck in my studio.

One of the other consequences of working in a very solitary way is that when you actually do encounter other people you don’t really know what to do with them. I’ll have this experience with my girlfriend sometimes, like I’ll spend the entire day working by myself and by 6:00, I’ll have realize I haven’t spoken to another person all day, and I’ll see my girlfriend and I will almost have forgotten how to speak. So, I’ll need like a couple of minutes of re-acclimation to remember what it’s like to actually be in the presence of real people.

I think it would have been around 1989, which is actually the beginning of my book “Porcelain.” I was only making $3,000 a year, but I was living in an abandoned factory with no running water, and I was living in a crack neighborhood, but I made enough money from DJ’ing that I could afford to pay the security guards at this abandoned factory $50 a month to look the other way. I was spending around $5 to $10 a week on food, so at that point I realized music could be a paying career, even though it was only paying me $3,000 a year.

I have this weird lamp that looks like a squirrel and I bought it, I don’t know, 15 years ago in a junk shop. I had this crazy house in upstate New York, it was like my degenerate party palace, it was on 65 acres, and it was three houses. The main house was about 12,000 square feet and I built a disco in the house, and built a spa in the house, and it was where my friends from New York would hang out and have all sorts of alcohol-fueled degeneracy. And then I got sober, and I sold this compound, and the only thing I took with me from the compound was this squirrel lamp. And this squirrel lamp goes with me everywhere, I feel like Steve Martin in “The Jerk,” when all he needs is his Thermos when he’s leaving his palace. My equivalent of Steve Martin in “The Jerk” with his Thermos is me with my little strange squirrel lamp.

The one purchase that I do regret was at one point right before I got sober — and maybe I shouldn’t say this because the last time I talked about drugs publicly I lost my life insurance policy — I did buy way too much cocaine. But in a way it wasn’t regrettable because I remember looking up in my apartment at 5:00 in the morning and my apartment was filled people who were only hanging out there to do the cocaine that I had bought. I realized that my life was just terrible. I was surrounded by these awful people who I knew were only there for the thousand dollars of cocaine that I had bought. It was disgusting and regrettable, but it also helped me to get sober, so I can’t regret it too much.

In the course of your life you’re going to make a ton of mistakes, just accept that it most likely going to end up in a good place. Because, in the course of my life I’ve made countless mistakes, I mean huge, career-destroying soul-shattering mistakes, but the cumulative effect of all those is me as I sit here right now. And I’m actually quite grateful for the life that I’ve had, and I’m really happy with the perspective that I have. And I wouldn’t have this life and perspective without all of those mistakes.