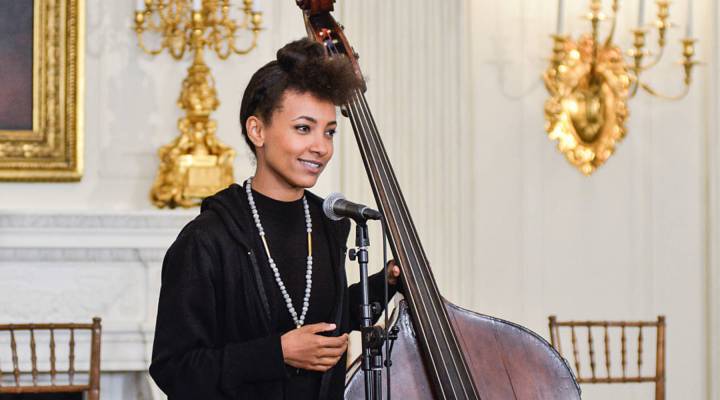 Think back to your first job. Maybe you learned a lesson that stuck with you or maybe you used the money you earned from it to make an impulse purchase you really, really wish you could take back.

Jazz musician Esperanza Spalding sat down with producer Raghu Manavalan to take the Marketplace Quiz, our questionnaire based on experiences with work and money. Her latest album, “Emily’s D+Evolution,” is out now.

I think the hardest part, what’s coming to mind right now, is learning that you can’t really trust the opinion of other people about the work that you’re doing.

You know, if your boss in the office says, like, “This is not a good article, I need to you re-write it for this, this, this, this reason,” and then you re-write it and you see that it’s better, you’re gonna go, “OK, I’m going to trust my boss and also I’m accountable to him.” But in music, or in art, you have to find this compass in a way that’s sort of insulated from other people’s feedback and hold yourself accountable to the standard that you believe in.

That sounds really nice, but it’s actually very, very, very, very challenging to keep in touch with that compass, when a lot of other people are giving you opinions, good and bad, about the work that you’re doing.

Oh, my God. So many things. I feel like everything I’ve ever ordered on Amazon, I don’t understand. I love Amazon, but I never use what I buy. It’s crazy. I feel like half my bookshelf is just stuff that I’ve “one-clicked” and never read and will never read.

Oh, very early actually, very, very early, when I was probably 15. I had a trio with a friend, with two friends obviously. I didn’t sing yet, so we billed ourselves as a trio and then we realized, “wait a minute, we could charge as four people, but we’re only three. Because what if I learned how to sing?” [laughter] And that’s when it all came into focus. You could do things to make more money playing music.

Yeah, there were a lot of gigs at that time when I was very young in Portland, and I started gigging a lot. I never understood you could do that for your whole life. It seems so novel you know, I always had, like, 9-to-5 jobs when I was younger, and older, and at one point my boss pulled me aside, and he said, “You know, you can’t keep missing work to do gigs. You’re going to have to choose.” And then I realized, like, “Oh, wow, I have been earning money playing gigs, maybe I can actually pay my rent this way.” And the rest is unfolding.

My first job, I worked at a place called People’s Food Co-Op. That was my first real job. I fell asleep as my boss was telling me things, ’cause I had just discovered that I didn’t live at home anymore and I could stay out late and get into trouble, and nobody would be there to notice when I came home. So, I was doing that pretty much every night and, I’d go in to have meetings with my boss Louise, and then I’d wake up to her yelling at me, saying, like, “Are you listening Esperanza?” And I would have fallen asleep. I was very irresponsible and I’m really sorry, Louise, for being such a horrible employee.

And I won’t even tell you about working for the Portland Parks and Recreation for the No Ivy League. That was my second job. I really am from Oregon. I don’t know if you’ve noticed this, but I’m from Oregon.

Right now, my most prized possession is the journal that, or the notebook in which I have been brainstorming and devising the next iteration of my project. If I lost that notebook, it would really hurt and sting, ’cause everything is in there. It’s just real, it’s raw, it’s like a field journal because it’s with me all the time and cause I think of something at the moment that seems brilliant, and if I lost that possession, it would hurt, it would hurt a lot.

Oooh. A couple things. One, no matter how daunting it seems, make sure you can repeat everything in the contract in your own language. Make sure that you can say each paragraph again in your own laymen’s terms. I would make sure you could say that to a lawyer who can then tell you, “yes or no, you did understand that or you didn’t understand that.”

I would also, I would have said, “No, you can do it by yourself, first, before you reach out for support, or before you depend on other people, their support making your visions come to fruition.” I’m learning that now, and I think I would have done some projects much better if I would have had that mode going into the creation of it. But you live and learn.