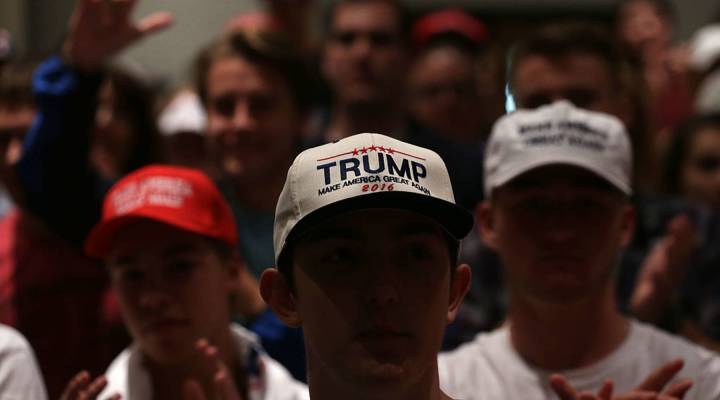 Many blue-collar white Americans are upset at the state of this country. Our society and economy has rapidly changed over the past few decades, and they’ve watched their way of life crumble. Their jobs are gone and they can no longer afford to send their kids to college. At the same time, their “silent majority” is disappearing as the American populous rapidly becomes more diverse, and the people who were once disenfranchised minorities are granted a leg up. The men who bought into the American Dream are now frustrated that the social contract they felt entitled to has been broken and that they have been forgotten. And in the midst of this anger, they’ve latched onto someone they feel can make it all right again: Donald J. Trump

Michael Kimmel is the SUNY Distinguished Professor of Sociology and Gender Studies at Stony Brook University, and author of the book Angry White Men: American Masculinity at the End of an Era. He spoke to Marketplace about this pool of Trump voters.

From ANGRY WHITE MEN: American Masculinity at the End of an Era, by Michael Kimmel. Reprinted with permission from Nation Books.

Rick is one of the men you will meet in this book, men who feel they have been screwed, betrayed by the country they love, discarded like trash on the side of the information superhighway. Theirs are the hands that built this country; theirs is the blood shed to defend it. And now, they feel, no one listens to them; they’ve been all but forgotten. In the great new multicultural American mosaic, they’re the bland white background that no one pays any attention to, the store-bought white bread in a culture of bagels, tortillas, wontons, and organic whole-grain designer scones. They’re downwardly mobile, contemptuously pushed aside by fast-talking, fast-driving fat cats and bureaucrats.

And they’re mad as hell.

You see them pretty much everywhere these days—yet they’re often invisible. They patrol America’s southern border, determined to keep out Mexican immigrants. They tune in to venomous talk-radio hosts who translate economic anguish, psychological distress, and political confusion into blind rage. They swarm into populist Tea Party rallies, hoping to find like-minded kinsmen willing to join with them to turn the country around. Some even take up arms against their own country, establishing semiautonomous enclaves and blowing up federal buildings. And, of course, when threatened by external forces, they muster up their coldest steel-eyed Dirty Harry imitation and say, “Make my day.”

In suburbia, they’re the ones who cut you off on the freeway, screaming with rage if you dare to slow them down. If their kid doesn’t make that suburban soccer team or that heartland hockey team, they’re the ones who rush out onto the field to hit the coach or strangle the referee—or start a fight with another equally enraged dad. They hiss with rage at their ex-wives (and their ex-wives’ lawyers) in family court. Further up the economic ladder, they’re the guys seething in the corner of the corporate “diversity training” workshop, snarling that they are now “walking on eggshells” around the office, or stewing when their company hires a woman or a minority, because, they say, affirmative action is really reverse discrimination against white men. And some of their teenage sons are strolling through deserted suburban train stations at night with a bunch of friends, looking for immigrants or gay men to beat up—or kill.

They are America’s angry white men. Actually, one might say more simply that they’re just America’s white men—they just happen to be angrier than ever before in our recent history. Journalists duly record the decrease in compassion and the increase in untrammeled selfishness, and pundits decry the collapse of civility in political discourse, even as they shout at each other at the top of the best seller lists. One guy’s a big, fat idiot! The other is a big, fat liar! The current political atmosphere in Washington has been called the nastiest and angriest in our history.

The past two decades have witnessed mainstream white American men exploding like never before in our history. They draw their ranks from the middle class (office workers, salaried salesmen) and the lower middle class (the skilled worker, small farmer, or shopkeeper). They’re the “pa” in the ma-and-pa store, Richard Nixon’s “silent majority,” and “Reagan Democrats.” They’re “Joe Lunchbucket,” and “Joe the Plumber,” and just plain Joe. They feel they’ve borne the weight of the world on their backs, and they can’t hold it up any longer. And now, suddenly, some of these regular guys are reinventing the American Revolution with Tea Party, Minutemen, and Patriot organizations, while others are further out there, organizing militias and joining survivalist cults, waging war on “feminazis,” rampaging through their workplaces, promoting protectionist and anti-immigrant policies.

They’re listening to angry white men like Rush Limbaugh, Mike Savage, and a host of other radio hosts who lash out at everyone else as the source of their woes. They’re trying to roll back the gains made by women and minorities in corporate and professional life and resisting their entry into the ranks of soldier, firefighter, and police officer. And their sons are either busy destroying the galaxy in their video games or actually opening fire on their classmates.

Some explode at work, “going postal” as they slaughter coworkers, supervisors, and plant managers before, usually, taking their own lives. You’ve heard of “suicide by cop,” where a perpetrator pretends to go for his gun and the police open fire? These guys commit “suicide by mass murder”: intent on dying, they decide to “take some of them with me.”

And when they’re not exploding, they’re just plain angry and defensive. They’re laughing at clueless, henpecked husbands on sitcoms; snorting derisively at clueless guys mocked in ads and reality-TV segments; and snickering at duded-up metrosexuals prancing around major metropolitan centers while they drink cosmos or imported vodka.

They sneer at presidential candidates like John Kerry who speak French, eat brie, and drink Chardonnay. They see nothing but feminized wusses who actually support global environmental policies and negotiation and diplomacy instead of “my way or the highway” unilateralism.

Unapologetically “politically incorrect” magazines, radio hosts, and television shows abound, filled with macho bluster or bikini-clad women bouncing on trampolines. These venues are the new “boys’ clubs”—the clubhouse that once said “No Gurls Allowed.” These moments allow these guys, who otherwise feel so put down, so “had,” a momentary feeling of superiority.

Yet few observers notice the gender of these vitriolic legions. Few, if any, couple the increase in American anger with the growing gulf between women and men. The gender gap—politically, socially, and economically—is as large as it has ever been. It’s not “Americans” who are angry; it’s American men. And it’s not all American men—it’s white American men. This is a phenomenon so visible, so widespread, that were it happening with any other group (say, black men or Asian women), it would be discussed incessantly. But precisely because it’s so ubiquitous, so visible, it has received hardly any serious discussion.

Now, it is true, one must say at the outset, that some of the most visible angry Americans these days are women, especially those parading at Tea Party rallies. And the patron saint of American anger at the moment is not former vice president Dick Cheney, sneering arrogantly at all potential opponents, but his daughter Liz, and the seemingly omnipresent Sarah Palin. Palin has become a poster girl for right-wing rage—and I mean that more than metaphorically. She is the Betty Grable of the political Right and the fantasy ideal of thousands, perhaps millions, of red-blooded American men. She’s salty and sexy, vampy and folksy, strong yet slightly slutty.

And the Tea Party, at 59 percent male, is somewhat anomalous on the political landscape. While the men who overwhelmingly populate the ranks of rage rely on some amount of women’s backstage support, the theme of their agitation, the motivation for their mobilization, is a desire to restore or retrieve a sense of manhood to which they feel entitled.

And they’re unmistakably white. Former MSNBC political show host Keith Olbermann called the Tea Party the “White People’s Party,” while Jon Stewart hailed it as “a festival of whites.” It’s ironic, since the election of Barack Obama, the first African American president of the United States, was meant to suggest that America was becoming a “post-racial” society. Instead of the predicted “Bradley effect”— in which white voters told pollsters that they were going to vote for Mayor Tom Bradley of Los Angeles, but then, in the privacy of the voting booth, decided they just could not pull the lever for a black man—there was the “Obama effect,” in which more people ended up voting for Obama than told pollsters that they would and afterward congratulated themselves on having transcended racism. (I call this “premature self-congratulation.”)

But Obama’s election and reelection have actually elicited the most viciously racist public discourse—only thinly veiled behind well-worn code words—in which Tea Partiers and other activists shout racial epithets at elected members of Congress, and half of those partiers believe that Obama has usurped the presidency, having been born outside the United States. Maybe we should call this version of the backlash the “reverse Bradley effect”—having now declared ourselves post-racial, suddenly white people have given themselves more permission to express deep-seated racism. It’s as if having a specific target for their rage enables their racism, because they have already congratulated themselves for not believing those racial slurs about “all of them.”

And you’d see the same thing at all the other rallies across the country, rallies where newly formed groups of mostly white men evoke the spirit of the American Revolution—Minutemen, Patriots, Tea Party—to express their contemporary rage at immigrants, health care, and taxation. Populist movements have swept across America before—most notably at the turn of the last century, with similar contradictory politics, a combination of agrarian socialism and racist nativism. Then, as now, populism combined anti–Wall Street sentiment and anti-immigrant sentiment; together, they fueled an agrarian anger at their “enabling” government bureaucrats.

Populisms are always contradictory, because populism is more an emotion than it is an ideology. And that emotion is anger.