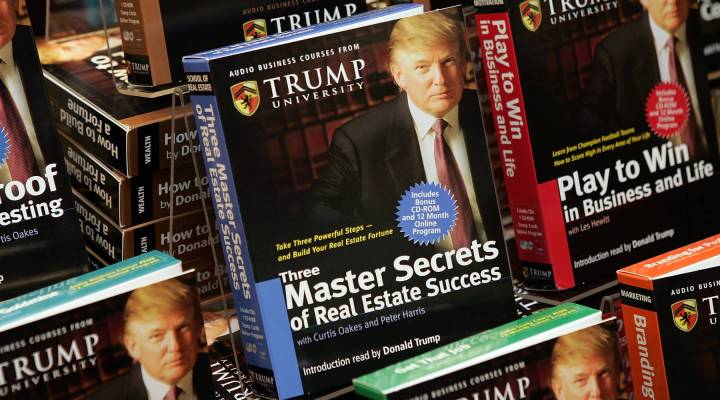 Copies of 'How To Build Wealth,' which is a series of nine audio business courses created by Trump University, lie on display at a Barnes &amp; Noble store in 2005. The organization currently faces a class-action lawsuit from unhappy customers. Scott Gries/Getty Images

Copies of 'How To Build Wealth,' which is a series of nine audio business courses created by Trump University, lie on display at a Barnes &amp; Noble store in 2005. The organization currently faces a class-action lawsuit from unhappy customers. Scott Gries/Getty Images

“Donald Trump is a phony, a fraud,” Romney said, according to a copy of his remarks he posted. “His promises are as worthless as a degree from Trump University. He’s playing the American public for suckers: He gets a free ride to the White House and all we get is a lousy hat.”

Romney went on to skewer Trump over his viewpoints on the U.S. economy, including a proposal to adding a tariff to Chinese goods and his tax plan. In addition to Trump University, Romney also targeted Trump’s business acumen, citing bankruptcies and failed ventures.

“If Donald Trump’s plans were ever implemented, the country would sink into a prolonged recession,” Romney said.

Trump made sure to hurl insults on Twitter at Romney before the speech, reminding the public that he supported Romney during Romney’s campaign for the presidency in 2012. It was an endorsement Romney was happy to tout then.