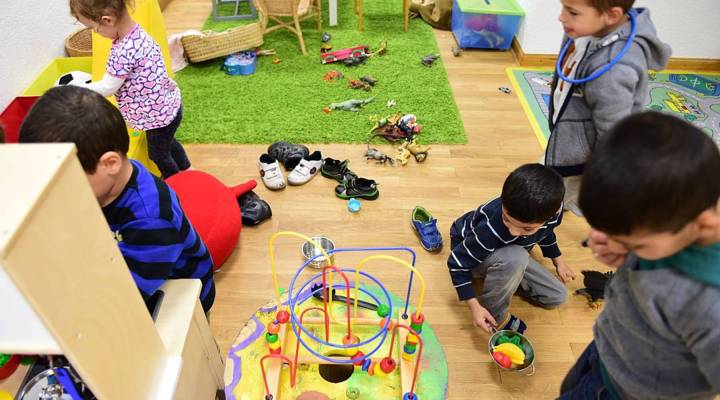 The rising costs of child care have soared this year, turning the seemingly straightforward issue into a way for both presidential candidates to appeal to female voters.

Hillary Clinton said in May families shouldn’t have to pay more than 10 percent of their income on childcare and Donald Trump, during an economic policy speech this week, said he wants to let parents deduct the average cost of child care spending from their taxes.

But at the heart of the issue is a child care system that has been tough on parents and child care workers alike. As the cost of child care goes up, those working in the industry remain some of the lowest paid workers in the country.

“We have a broken system,” said Marcy Whitebook, director of the Center for the Study of Child Care Employment (CSCCE) at the University of California, Berkeley. There’s a disconnect, she said, between what scientific research says about the importance of early education and quality child care, and how it’s funded.

People used to think of child care as babysitting, she said, but now research indicates that it is a learning environment that shapes the long term development of a child.

“We’ve really changed our understanding of it and its importance and what it takes to do it well, but we haven’t changed fundamentally the amount of funding we put toward it,” she said.

The center’s latest study reported that the median wage of child care workers in the U.S. is $9.77 an hour, and nearly half of those workers receive government assistance in some way. At the same time, the cost of raising a child has gone up in recent years, outpacing the cost of other services in the U.S. The expense has increased nearly twice as fast as overall inflation since the recession.

The discrepancy illustrates a complicated child care system that is labor intensive and difficult to make highly profitable, if you want to provide quality care.

“Nobody knows exactly how to explain this…but certain fixed costs go up and people are working with a very small margin,” Whitebook said. “And that the market, even though it’s very expensive for families, the market can’t really bear charging parents for the full costs of quality because it just doesn’t add up.”

For child care businesses, fixed costs include things like rent and utilities, but most importantly labor. Regulations prevent businesses from increasing the number of children one person can take care of, and in early education like preschool, teachers are required to have more qualifications than ever before.

While advocates agree this is a good thing, they say more reform is needed to provide wages that match the increased quality of care. Whitebook said this is complicated given that childcare is partially public, but mainly private.

“No parent is going to be told, ‘I’m sorry, you can’t afford to pay for schooling. Your second grader is just out of luck, there’s nothing for them,’” she said. “But in early childhood, we have a sort of mixed public and private system, but the bulk of it is private…If parents had to pay for K-12 grades, you would see some version of this issue — you would see parents really struggling to burden costs.”

It’s an issue for all parents, including those who work in childcare.

“It’s not uncommon for people who work in child care who cannot afford the program they work in,” Whitebook said. “It’s a familiar refrain. The irony is that the people who are working in child care are experiencing the same access problems and affordability problems that other parents are having.”

We asked a few industry workers about how they arrange care for their own children. Here’s what they shared:

After 12 years as a pre-K teacher, Kristy Umfleet will finally be able to afford the quality child care she wants for her children — by leaving her job. Soon, Umfleet will be an early child care education specialist, supporting teachers in the classroom instead of teaching students directly.

“I cried when I found out when I got the job because it’s one of the biggest burdens that I have on my shoulders,” she said. “My children deserve to get quality education and I couldn’t afford to give it to them. That really hurt me because I understand the importance of it, because I do it. I do it for other children.”

Umfleet’s experience as a parent reflects the financial burdens of those employed in early education. Her sons are seven years apart in age and the age difference is largely because child care is so expensive, she said. After her first son went off to kindergarten, her and her husband considered having another kid but decided against it.

“We knew there was no way we could afford the child care,” she said.

Over the years, her kids have received care through a mix of paid care and help from Umfleet’s parents. When her older son was about 18 months old, they sent him to program for a couple days a week and her mom look after him the rest of the time. The cost for the school was about $400 a month.

“That’s all we could afford at the time,” she said. It was important to her that he spent some time at the program.

“I wanted him to start socializing and start being around kids his age,” she said.

When he went to preschool for five days a week, the cost was $700 a month.

Umfleet said she is grateful for the opportunity to still contribute to the field and stay in the classroom, but she knows other child care professionals are not so lucky. She’s seen many quality educators leave because of low wages.

“Unfortunately in our field, I think we lose a lot of really great teachers for that reason,” she said. “People don’t want to just pay for their child care bills, they want to be at home with their kids.”

Ariana Carter has worked in child care for roughly 10 years, but being a first-time mom has emphasized the gravity of what she does for a living. Namely, she realized how hard it is for parents, emotionally, to even put their children in childcare.

Before she was pregnant, she would watch parents cry after dropping off their kids at her program.

“I knew it was hard but now that I have my own baby, it’s a whole different ball game,” she said. “I can’t imagine having to go back to work after three months and leaving my baby with a practical stranger.”

She told the parents of her students, “Thank you for putting your trust in me because now that I have my own baby, I realized how hard that is.”

After having her daughter Gabriela, Carter went back to work as a preschool teacher in April. While she is at work, her mother, who is retired, cares for her newborn. Carter said her job does offer a discount but even at a reduced price, it’s “a little too expensive.”

“It’s something that I know she’ll need when she gets older,” Carter said. “She’ll need that stimulation and being around other children.”

While she has added Gabriela to the list for her program just in case, she said “I still don’t know if it’s affordable at that point, so I might have to look at other preschools.”

For Cynthia Fregoso, expensive child care dictates where she works. Fregoso works in the office of a child care program. When she had her second son, Anthony, she was planning to leave her job instead of paying for the child care costs of two children. But her employer asked her to stay, offering to let her bring her son to work with her.

“I had him on a sling because I had to nurse him and that way I could type,” she said. “That’s the only reason I stayed here.”

Since then, her kids’ after school care have been a patchwork of sorts. Fregoso can’t afford to pay the full cost of her work’s program, so she has tried all sorts of combinations for care. This includes paying for one full day, or several half days at her program while filling the gaps with help from the boys’ grandfather, who will pick up them on some days.

But, for most days, they are in the office with her.

“Now that they are older, it’s easier. Sometimes I give Anthony some electronics and say ‘here you go.’ But honestly, it is hard. It’s distracting. You end taking care of your child more than doing any work. They’re hungry and bored, or they need to go potty,” she said.

Fregoso said she often times she has to play catchup on her work on the days that they are not with her.

She is glad to have her work discount because she wouldn’t be able to afford the care otherwise.

“Even though we got a discount, it was crazy,” she said. Preschool, for example, cost her about $400 to send Anthony to the program several times a month. The full cost, for a month of preschool,  would have been about $1,700, she estimated.

But, she said, it’s important to have them enrolled in a preschool program for their social development, rather than just have her stay at home to take care of them, even if it might make more sense financially. She learned this with her older son.

“With Gabriel, I felt like I was working just to pay for child care. At the time, it didn’t make sense, but it was beneficial for him to be around other kids his age,” she said. “When he first went into preschool, he only spoke Spanish, he came out speaking English. He learned. He was polite.”

With summer ending, the boys will go back to school, which provides some financial relief. But, like many parents, Fregoso has to figure out care for the days between the end of summer camp and the start of school. For her, that will likely mean her sons will be back at the office. 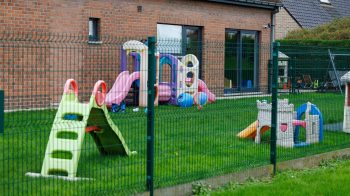