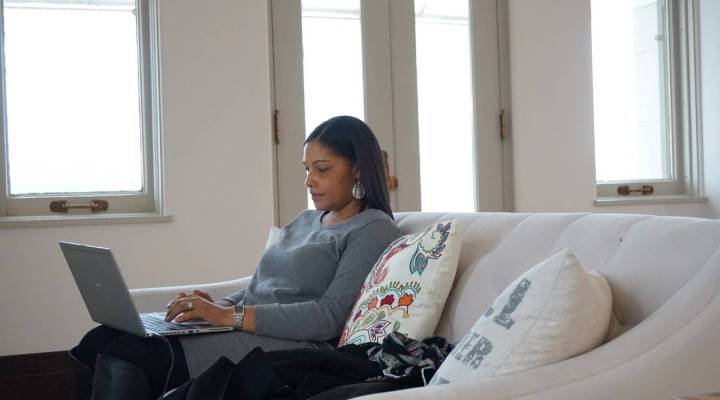 COPY
Amber Morris, a manager for the Pittsburgh Downtown Partnership, works out of the Coterie between meetings. Erika Beras/Marketplace

Amber Morris, a manager for the Pittsburgh Downtown Partnership, works out of the Coterie between meetings. Erika Beras/Marketplace
Listen Now

It’s early morning, and Mary Jane McCullough drops her 14-month-old daughter off at day care. Then she walks through a set of doors and heads to her desk, where she starts her day running a language interpretation company. She used to do this at home.

“Trying to work from home with kids is impossible. It’s keeping my phone on, taking conference calls in the bathroom, with kids screaming outside,” she said.

Co-working spaces are popping up in a lot of cities. These are flexible, communal workplaces where people can rent a desk by the day or month. They’ve become more popular in the gig economy.

But some women feel those spaces don’t cater to their needs, so they’re creating their own spaces. Like where McCullough works, at Whetstone, a co-working space just outside Pittsburgh that has child care. Workers here pay $25 a day or $150 a month for desk space, access to copiers and scanners, and unlimited coffee. The childcare is extra.

Mary Jane McCullough and her daughter Maggie on the day care side of Whetstone, a co-working space just outside Pittsburgh. Most days, she drops off her daughter on one side and then works on the other side of the building.

Jessica Strong opened Whetstone just over a year ago when she couldn’t find a flexible workspace and day care. Turns out a lot of other women felt that way too — nearly all the members here are moms, she said.

“It was intended to be for parents. It just so happens that women are the ones that left the workforce to be home more with their kids,” she said.

The Bureau of Labor Statistics says nearly 10 percent of the workforce is self-employed. And some of those workers want to work away from home. That’s why co-working spaces keep opening up, some catering to women. They offer things like child care and hair and makeup rooms. And McCullough said there are also networking opportunities.

Dedicated spaces that market to women have opened in San Diego, Washington, D.C., and New York. Only a few miles away from Whetstone in downtown Pittsburgh there’s another space that markets to women called the Coterie. It’s light and airy, and the decor resembles a day spa. It’s where Kate Stoltzfus goes to co-run a company that helps female entrepreneurs. She said it feels right.

The sitting area at the Coterie, a recently opened female-only co-working space in downtown Pittsburgh.

“We haven’t felt as relaxed or at home in any other space,” she said.

The Coterie is in an office building developed in 1902 by the famed industrialist Henry Clay Frick. It’s located in the penthouse suite.

“It’s where Henry Clay Frick used to have his good old boys’ club,” Stoltzfus said. “I guess it used to be a cigar lounge at one point. It was kind of his area to be there with the boys, and I think it’s kind of neat that now it’s occupied by women.”

Kind of like a really big room of one’s own.