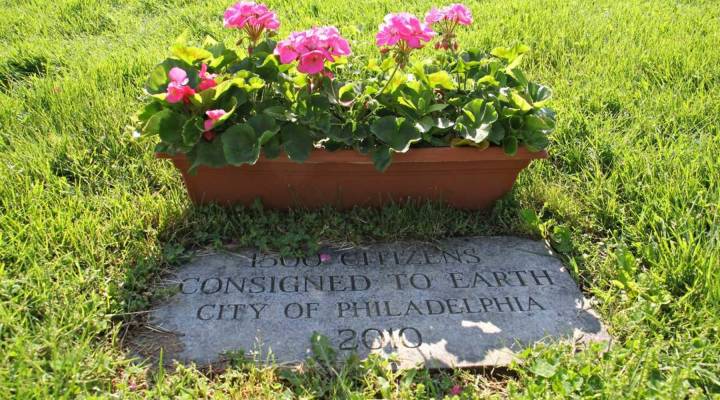 COPY
A single stone marks the grave of 1,500 Philadelphians whose cremated remains were never claimed from the Medical Examiner's Office.  Emma Lee/WHYY

A single stone marks the grave of 1,500 Philadelphians whose cremated remains were never claimed from the Medical Examiner's Office.  Emma Lee/WHYY
Listen Now

At Laurel Hill Cemetery in Northwest Philadelphia, superintendent Bill Doran leans down by a headstone with an almost-cryptic message.

“All it says is something simple: 1,500 citizens consigned to earth, city of Philadelphia 2010,” he said.

What that means is that the city did a mass burial of what’s called unclaimed bodies — that’s when a person’s next of kin can’t be tracked down.

Genealogist Megan Smolenyak said there are a number of reasons for this.

Friends drift apart; someone moves to another city and becomes homeless; a person dies of old age and isn’t survived by anyone; or someone emigrated to the U.S. alone.

“And this is maybe the saddest thing of all: There are people who really do care but are just too darn poor to do anything about it,” she said.

Doran said the cost of buying a plot, paying the undertaker and organizing the ceremony is just too much.

And so taxpayer support steps in. The Medical Examiner’s Office will keep a body for three months in a refrigerated morgue before cremating. Then the remains are carefully stored. When they start to accumulate, Doran drives his truck to the Office to pick them up, and organizes a mass burial in a plot paid for by the city.

“Approximately 500 at a time. We stack them. Each one is individual. And they’re always kept individual. They’re not mixed,” Doran said.

But not all counties will pay to have the remains buried.

“In some places,” Smolenyak said, “their ashes are just scattered at sea, or over the mountains, or that kind of thing, so sometimes there’s not even a burial place, should be family be found later.”

In Philadelphia, the remains are buried, although in a much more modest way than the ornate Civil War-era mausoleums around them. Doran is proud that his cemetery dignifies those who’ve passed without much notice.

“To me, this is one of the highlights,” he said.

Next to the grave, another headstone was recently installed — commemorating 515 more Philadelphians who died alone.