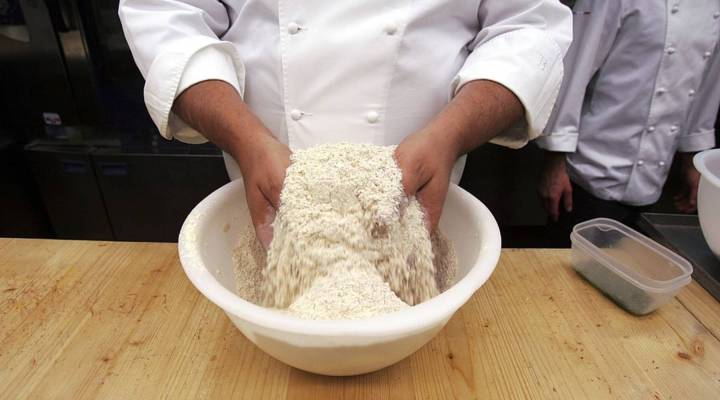 COPY
General Mills is expanding its flour recall after more cases of E.coli were reported in the Midwest.   Marco Di Lauro/Getty Images

General Mills is expanding its flour recall after more cases of E.coli were reported in the Midwest.   Marco Di Lauro/Getty Images
Listen Now

Most of us know foods like eggs and meat, consumed raw, could make us sick, because of bacteria. But many of us may be in the dark about the dangers of uncooked flour, which we might eat in the form of cookie dough or cake batter.

In May, the company issued a recall of several batches of flour, including its best-selling Gold Medal flour, after federal agencies linked E.Coli illnesses to the products. Consumers had eaten or handled the flour without proper cooking or hand-washing.

The Food and Drug Administration and Centers for Disease Control and Prevention have now found links between 46 E.coli illnesses and raw flour. Evidence indicates flour produced at a General Mills facility in Kansas City, Missouri is the source of the outbreak.

General Mills has now expanded its recall to include flour produced through February 10, 2016.

Thirteen people have been hospitalized and one has developed a type of kidney failure in connection to the outbreak. There are no reported deaths.

Felicia Wu, a food safety expert at Michigan State University, said even back in her 7th grade home economics class, she learned uncooked flour could make you sick.

Wu said bacteria are common in the environment, including the wheat fields flour comes from.

“The pathogens might be in the water that’s used to irrigate the crops,” she said.

They could also come from wildlife running around in the fields, or run-off from livestock operations. E.coli could then spread onto the equipment used to harvest, transport, store or process wheat into flour.

“It can cross-contaminate many other parts of the facility and therefore contaminate a lot of the flour, even when it may have started with a relatively small amount,” said Sandra Eskin, director of the Safe Food Project at the Pew Charitable Trusts.

General Mills noted that the “normal flour milling process does not remove these bacteria.”  The company does not heat-treat raw flour sold as an ingredient for baking because “that would affect baking performance.”

The company said this is the first E.coli outbreak confirmed in connection with flour and that “no illnesses have been connected with flour that has been properly baked, cooked or handled.”

Fred Pritzker is a Twin Cities-based attorney who represents people harmed by foodborne illness, including the recent outbreak tied to flour. He said consumers obviously need to take precautions with uncooked flour. But he said responsibility for any illness ultimately falls to General Mills.

“What I would hate to see is a shift to blaming consumers for this rather than from the manufacturers, which could prevent it in the first place,” he said.

Federal agencies and General Mills are investigating the cause of the outbreak. The company said only a small subset of flour produced at its Kansas City, Missouri plant has been traced to consumers who got sick. But it has increased cleaning protocols at the facility.