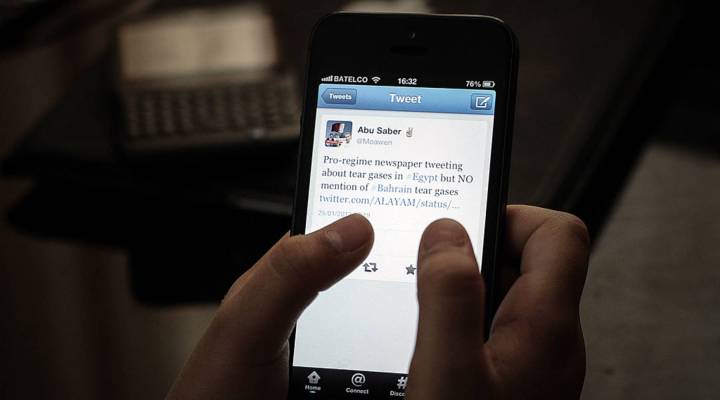 COPY
Twitter has provided a platform for movements such as the Arab Spring, but it also leaves room for hate-filled comments.  MOHAMMED AL-SHAIKH/AFP/Getty Images

Twitter has provided a platform for movements such as the Arab Spring, but it also leaves room for hate-filled comments.  MOHAMMED AL-SHAIKH/AFP/Getty Images
Listen Now

Twitter recently banned a prominent conservative editor, along with a group of other twitter users for harassing Leslie Jones, one of the stars of the recent “Ghostbusters” reboot.

The messages that Jones received were utterly vile. Racist and sexist really doesn’t even begin to describe them.  As Jones said in her final Tweet “all this because I did a movie.”

It’s  the ugly side of the same free platform that facilitated the Arab Spring and #BlackLivesMatter.

Twitter’s resultant banning spree is the latest move in the tightrope act Twitter has been walking between regulating speech on its platform while keeping it free enough for people to want to use.

“Twitter has talked big talk about free speech before, it’s kind of in their corporate identity,” said Sarah Jeong, a lawyer and contributing editor at Motherboard.  “’The free speech wing of the free speech party’ — that’s an actual quote from a Twitter executive.”

But over the years, Twitter’s initially sparse terms of service rules have become much more restrictive. Lawsuits, terrorism and harassment have all chipped away at Twitter’s original Wild West approach.

“They’re trying to reconcile their free speech roots with the interest of keeping their platform usable,” said Jeong.

For some users, like the banned editor Milo Yiannapoulos, free speech is paramount.  For others, it’s not. “The majority of Twitter users probably are not as vested in that,” said Ross Rubin, director of industry analysis at App Annie.

In the case of Leslie Jones, Twitter made a high-profile example of enforcing its policies. In the past, its enforcement of what’s allowed hasn’t been as rigorous as that of other platforms like Instagram or Facebook.

Twitter will need to do more if it wants to increase its user base, said Michael Pachter, a research analyst at Wedbush Securities. “They’re more likely to achieve that goal if Twitter is safe. If you go on the first time and you see people slamming one another’s race or sex or whatever it’s not comfortable.”

In the end, Twitter is a business, not a government, said Pachter.“The constitution doesn’t apply to them they can censor whatever the hell they feel like censoring.”