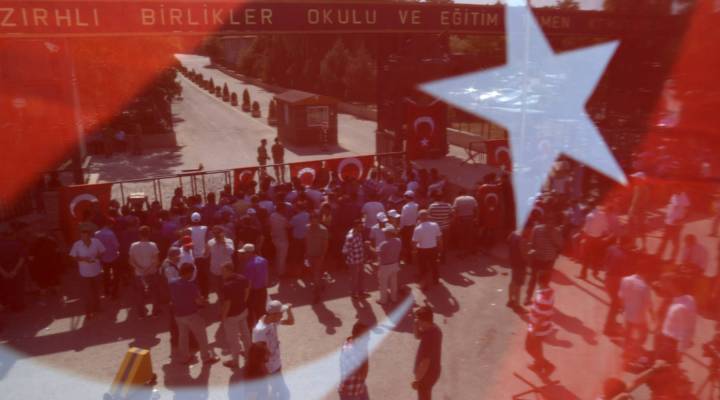 COPY
People are seen through a Turkish flag as they block the entrance of the Armored troops school in the capital of Ankara. ILYAS AKENGIN/AFP/Getty Images

People are seen through a Turkish flag as they block the entrance of the Armored troops school in the capital of Ankara. ILYAS AKENGIN/AFP/Getty Images
Listen Now

After a military-backed coup in Turkey failed over the weekend, forces loyal to the country’s government have been rounding up perceived opponents of the regime. But the Turkish economy continues to function, despite the region’s political turmoil. Its currency, the lira, fell 4.6 percent on Friday as the news broke, but has recovered about half of that in trading so far today.

What does this all mean for Turkey’s future? Or even Europe’s future?  Ian Bremmer, the president and cofounder of the Eurasia Group, joined us to talk about where the country seems to be headed.

Bremmer on Turkey’s efforts to join the European Union:

It’s really a non-starter. I don’t think  there’s anyone among the main European Union countries that believed that Turkey was ever going to make it towards full membership. But the wedge that’s being driven between rule of law, common values — I mean, all the things that brought the EU together as their initial experiment…look the farthest they’ve ever been for the Turks at this point.