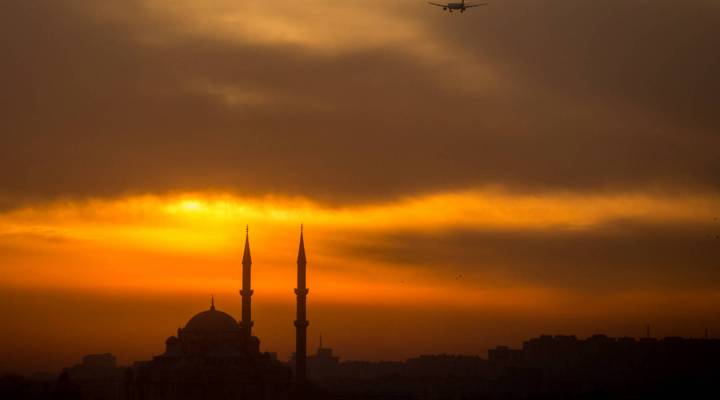 A view of the Fatih Mosque in Istanbul, Turkey. Chris McGrath/Getty Images

A view of the Fatih Mosque in Istanbul, Turkey. Chris McGrath/Getty Images

Turkey, a country already struggling with flagging tourism, continues to feel the economic effects of the recent attempted military coup.

Turkey’s currency, the lira, fell by nearly 5 percent on Friday following news of the takeover declaration. The lira recovered a bit today, rising 1.4 percent, but other aspects of the country’s economy may not bounce back as quickly.

Friday’s attempted military coup prompted the U.S. Department of State to extend its travel warning for Turkey, asking Americans to “reconsider travel to Turkey at this time.”

Turkey’s tourism, a key industry in its economy, was already hurting from previous incidents of violence. The most recent was in late June, when a terrorist attack at the Istanbul Ataturk airport killed more than 40 people and injured hundreds. Within the first quarter of this year alone, Turkey experienced a 10 percent decline in visitors, according to travel news site Skift.

Zekiye Yucel, the managing director of a vacation packages company, told The Telegraph that the uncertainty of the military coup is even more damaging to the country’s appeal among tourists than the terrorist attacks.

“Turkey’s tourism chapter is ending,” she told the newspaper. “What’s going to happen over the next six months, we’re not sure, but I would not feel comfortable sending people on holiday in the next few months.”

The news comes as Turkey tries to improve its relations within the European Union, in hopes of formally joining the economic alliance. But, Friday’s action has likely driven a larger wedge in those discussions, Eurasia Group President Ian Bremmer told Marketplace’s David Brancaccio this morning.

“It’s really a non-starter,” he said. “I don’t think  there’s anyone among the main European Union countries that believed that Turkey was ever going to make it towards full membership.”

Bremmer also discussed what this discussion says about the future of the EU in general:

For its part, the EU condemned the coup, releasing a statement today calling Turkey, “a candidate country and a key partner for the European Union.”

“The EU calls for restraint to be shown by Turkish authorities, including by the police and security forces. All must be done to avoid further violence, to protect lives and to restore calm,” the statement reads.